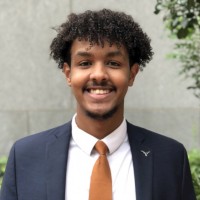 “Each One Teach One” is an enriching 19th century African American proverb that has had a profound impact on Alexander Tekle’s life. When an enslaved person learned to read, it became his or her duty to teach someone else, spawning the phrase. In the spirit of this proverb, Alexander has dedicated his life to uplifting his community and aspires to leave a lasting positive impact on people’s lives. Alexander’s beloved mother instilled in him at a young age that education is the “great equalizer” and the premise for liberation from one’s conditions. Alexander’s humble Eritrean roots etched in him a socially conscious perspective of the world and an indelible appreciation for the educational and service opportunities available to him in his community. He has immersed himself in a multitude of academic and extracurricular activities, such as debate, computer programming, and civic service in order to hone his technical and people skills and to discover his greater purpose.

Since 2014, Alexander has been deeply involved in Junior State of America (JSA), the largest student-run organization in America, which uses its platform to promote democratic leadership and political discourse. Today, Alexander serves as the Lieutenant Governor for the Texas Junior State; his responsibilities include hosting the annual conventions in Austin, Houston, and Washington D.C., expansion and outreach, scholarship fundraising for underprivileged members, and leading and appointing Texas JSA’s 60-member cabinet.

Alexander is also in his seventh year competing in Speech & Debate and serves as the Vice President of the Plano Senior High School Debate Team. His passion for Extemporaneous Speaking and Lincoln Douglas Debate has enabled him to compete at prestigious competitions on the state and national level such as the Harvard Invitational and the Texas Forensics Association State Tournament.

Silicon Valley trailblazers like Tristan Walker and Monique Woodard motivated Alexander to seek leadership positions in Computer Club and to attain two summer internships at Ericsson. Alexander is the President of his school’s Computer Club and has competed in hackathons across the country. At Ericsson, he used his development skills (HTML, CSS, Java, Ruby) to upgrade Ericsson’s client-services portal and develop “EcoFriend”, a robot he created using Arduino microcontrollers and cloud-computing that detected and communicated soil and climate data including humidity, temperature, and wind speed. For his innovative use of Ericsson’s Internet of Things (IoT), “EcoFriend” won first place in the North American Ericsson Intern Showcase. The past two years Alexander has worked indefatigably on his nonprofit, Hack4Progress, to provide free computer programming support for other nonprofits and to create initiatives that address the technology gap in marginalized communities. Although unconventional, Alexander successfully configured a $25 Raspberry Pi “chip” into a fully functional computer. Despite limited funds, he has donated Raspberry Pi computers to disadvantaged students in his community for their basic academic needs and a means to explore their intellectual curiosity for STEM.

Alexander aspires to employ his innate passion for STEM and service to alleviate the discrepancies in technology that impedes millions globally from participating in the digital age. To meet these goals, he will pursue professional degrees in Electrical Engineering and Computer Science with a minor in Applied Mathematics and utilize this acquired knowledge to start a humanitarian engineering and social entrepreneurship firm. Alexander also understands that he will receive two invaluable educations in college: one in the classroom, another in campus community. He embraces the challenges and responsibilities of student leadership, and is committed to engaging and uniting his university peers to advance discourse in the campus community. Alexander seeks to emulate Ron Brown’s uncompromising approach to life, as well as his grace, determination, and his acknowledgment of collective progress.