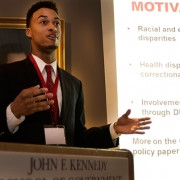 From birth, Aubrey and his triplets siblings, Charles and Nicole, have always pushed one another to succeed. They competed in nearly everything: from who could complete the summer reading list created by their librarian mother, to who could sweep hair up the fastest in their father’s barbershop. This sibling rivalry has always propelled them forward and in Aubrey’s case led him to a distinctly separate environment for intellectual exploration. His mother Diane jokes that Aubrey demanded to be placed in a separate kindergarten class. By middle school, he would end up at a separate school entirely. Leaving public school, Aubrey made a home at Polytechnic, a private school in Pasadena.

At Polytechnic, Aubrey found himself in the position of being not only one of the few African-Americans in his AP science and math classes, but also at his school entirely. Discovering a general atmosphere that did not address issues of race and equality, Aubrey worked to give back to his community, revitalizing his school’s Black Student Union as president. First creating an inclusive environment where student of color could feel comfortable and dissect issues of race, Aubrey organized several fundraisers to support a Tanzanian student through his enrollment in medical school, and procured Civil Right activist and member of the “Little Rock Nine” Dr. Terrence Roberts to speak to the student body on issues of integration at Little Rock Central High, all before delivering a speech to his administration, admissions office and student body about the need for diversity on campus. Because of his of academic excellence, strength of character, and reputation among faculty and contribution to the Poly community, Aubrey was elected Associated Student Body President and was named Jim Fullerton ’32 Scholar, receiving full scholarship both his junior and senior years of high school.

Aubrey is a sophomore at Harvard University concentrating in the History of Science: Medicine and Society. He spent his summer before his freshman year researching a deadly gastrointestinal disease that affects premature infants at the Saban Research Institute of Children’s Hospital Los Angeles. During his freshmen year, he served as President of the Freshman Black Table,the freshman subsidiary of the Harvard Black Student Association, was selected as a paid intern at Harvard Foundation for Intercultural and Race Relations, and ushered at the Kennedy School of Government’s Institute of Politics. His summer before sophomore year was spent in Lima, Peru where Aubrey received a David Rockefeller Grant to volunteer at Instituto Nacional de Saluddel Niño and the Instituto Nacional de Enfermedades Neoplásicas, the largest pediatric and cancer institutes in Peru respectively. There, in addition to serving as an educational assistant and bedside tutor to children, Aubrey had the opportunity to immerse himself in the culture, taking Spanish classes at Universidad del Pacifico and living with a host family. His sophomore year he hopes to volunteer with the Harvard Medical School’s Family Van, a mobile clinic that provides information and services to some of Boston’s most densely populated Hispanic and Latino communities.

Through it all, Aubrey has never forgotten about his siblings or the strong sense of family cultivated in him by his hardworking parents. Having experienced firsthand the disparities between private and public school education, Aubrey continues to relay college information such as deadlines and scholarships to his siblings. His brother, Charles, is studying public policy at American University in Washington, DC and his sister, Nicole, attends Barnard College/Colombia University.It is with a strong sense of self and an unwavering optimism that Aubrey looks forward to continuing to a very important chapter of his life. How grateful is he to be one of three.