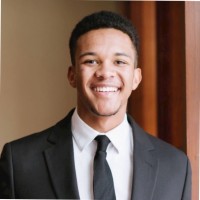 Growing up in a poor, African-American migrant community, where there were few role models and socio-economic opportunities were sparse, Brandon Staple, a gifted student and soccer-prodigy, was pursued by the most elite High Schools in the country. Instead, he chose to remain in his local community to impact change where he felt it was most needed. Overcoming obstacles like color-blindness, dyslexia, and family illnesses, Brandon has accomplished numerous “firsts” inspiring and transforming his peers, school, and community.

Brandon distinguished himself by tackling important, real-world, and college-level scientific research that will ensure his future success. He has excelled in pre-college summer programs at Colorado School of Mines and MIT evaluating protein signaling in cancer development and utilizing machine-learning to identify cancer biomarkers, respectively. Moreover, during his pre-engineering summer internship at Google, he utilized machine-learning to identify disease patterns in large medical datasets.

Brandon has demonstrated integrity-based leadership which has captivated the State, elevated school and community pride, and garnered him unimpeachable trust on and off-campus. Over the last 3 years, he inspired and captained his perennially low-ranked varsity soccer team to three consecutive State playoffs—the first in school history. Additionally, he was nationally recognized as a National Finalist for the Wendy’s High School Heisman Award (one out of seven-million students), received All-State soccer honors, and was a candidate for the U.S Soccer Development Academy.

Brandon has been a pioneer and leader elevating the caliber and diversity of numerous school organizations. He has served as student assistant for the Medical Biosciences Academy and student leader for National Honor Society.

Outside of school, Brandon has pursued a life dedicated to selfless benevolence enhancing the dignity of his fellow man and making his community a better place. He founded two non-profits: Soccer Gear for Jamaican Youth (SGJY) and Community Renaissance Initiative (CRI). SGJY is dedicated to serving orphans in his father’s native country, Jamaica, by providing them with soccer gear and other supplies to help them charter a path to future success. CRI inspires youth to use technology and sports to elevate their communities. In addition, at church, Brandon is the outreach youth leader tutoring new immigrants and teaching underprivileged youth about self-reliance.

This fall, Brandon plans to attend Stanford University as a Biochemistry pre-med student with the goal of becoming a community-minded Orthopedic Surgeon practicing in underserved areas to improve health-care accessibility and affordability.