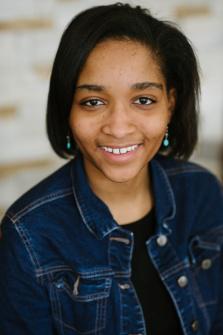 Caelle Rousseau was born in Port-au-Prince, Haiti. At the age of five, she emigrated from Haiti to join her mother in the United States. During this period, Caelle’s grandmother served as an awe-inspiring mother figure to her. She paid Caelle’s then eleven-year-old cousin, Farah, to teach Caelle the English alphabet and other instructional lessons to help Caelle transition into the American school system smoothly. At the early age of five, Caelle learned the importance of education, a concept which is now ingrained in her.

Growing up as an only child, Caelle constantly read in solitude. What began as a hobby for a young girl living in a household of non-English speakers led to an infatuation with literature and spawned her interest in English and debate forums. She was a member of her high school’s debate team, participated in the Princeton Classic as a freshman, and often received scores equivalent to those of her older, formidable opponents. Caelle has served as a Mock Trial lawyer since her sophomore year. She enjoys creating and presenting sensible and rhetorically convincing arguments. She is an editor of her school’s literary magazine, Caelestis, in which her own literary work has been published. She serves as a National Honor Society member and tutor, as well as a National World Language Honor Society member. Her assiduity has propelled her to the top one percent of her graduating class.

During her freshmen year, Caelle was selected to become a Princeton University Preparatory Program (PUPP) Scholar. Through PUPP, Caelle attends an annual summer institute at Princeton University and was selected to participate on a youth panel at the Mission: Possible Transforming the Future through College Access conference. As a panelist, Caelle adamantly advocated that all students should be equipped with the necessary skills to achieve at an institution of higher learning because only then do they truly have a choice regarding their future.

In addition to fostering Caelle’s sense of academic commitment, Caelle’s family background inspires her sense of civic responsibility. She has volunteered at Pavilions at Forrestal, an assisted living home, since eighth grade. She is a Nottingham Peer Leader and advises freshmen about successfully navigating high school. As a Peer Leader, Caelle also participated in Relay for Life, a fundraising event for the American Cancer Society. She is a member of Outreach for the Stars and volunteers at organized events that provide food, clothing, and essential items for students and their families. Caelle was recently recognized and awarded by the Hamilton Rotary Organization for her involvement within her community. She plans to pursue a career in service work, preferably for a service organization that targets international communities.

Caelle Rousseau currently resides with her grandmother, mother, younger brother, aunt, uncle, and two young cousins. She works hard to provide a positive influence on her younger brother and cousins. Once compiled, Caelle’s successes, big and small, will serve as a testament to the resilient, independent women in her life.