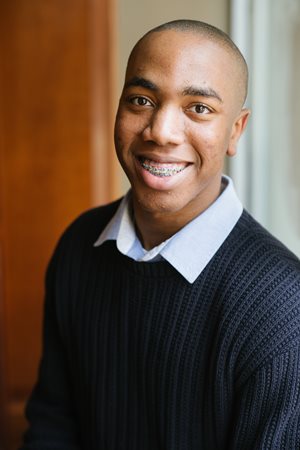 Rusty Fields is an enthusiastic, passionate, and highly self-motivated individual who consistently seeks new opportunities to learn and grow. His burning desire and passion for becoming a neurosurgeon are equally matched by his dedication and commitment towards civic engagement and public service. He attributes his industrious spirit and creative nature to his Jamaican-immigrant mother. A high school senior, home schooled in Brooklyn, NY, Rusty has employed the vast cultural resources available in NYC to enrich his high school academic experience.

At age 12, Rusty took an online neuroscience class from Duke University and became fascinated with the brain, leading to his passion for neurosurgery.  A voracious reader, who particularly enjoys the classics, biographies, and personal development books, Rusty naturally began reading everything he could about the brain. A staunch believer that success is “the progressive realization of a worthy ideal,” Rusty sought opportunities to move towards his goal, searching for a full immersion experience (unavailable in the US for legal reasons). In the summer of 2016, he emailed over 300 neurosurgeons around the world in countries such as China, Nigeria, and Brazil, and through his persistence and perseverance, secured a summer internship in Harare, Zimbabwe. There, he shadowed Dr. Jacqueline Nozipo Maraire, an American-trained neurosurgeon, who completed her residency at Yale University, under Dr. Ben Carson’s unit. During his internship, Rusty worked twelve hour days in the operating room, engrossed in various surgeries, like Low-Grade Gliomas, Laminectomies, Craniotomies, and Epidural Hemorrhages. Following his internship, Rusty partnered with Dr. Maraire and the World Health Organization to initiate a “shunt program” in Zimbabwe to sponsor the surgeries of children suffering from Hydrocephalus.

Rusty is extremely involved in his community, where he currently serves as the President of his neighborhood’s Block Association, acting as a liaison between residents and elected officials. He has committed himself to creatively solving problems, such as designing a math and literacy program to address the crisis of substandard test scores of African-American students. Last fall, Rusty raised $15,000, within a three week period, through his nonprofit organization, to sponsor a group of 40 urban Brooklyn teens (who would have never had an opportunity like this) to attend the Harvard Mock Trial High School Seminar Program. For his work, Rusty was awarded a Citation from Brooklyn Borough President, Eric Adams, lauding his “commitment to selfless community acts.” Rusty felt the greatest benefit of this opportunity was that the students took home a new perspective on learning that will build confidence, ignite desire, and ultimately become the seed that unleashes their true potentials.

Rusty dreams of leveraging the synergies between his passion for the brain and his commitment to community service to help create medical breakthroughs that can radically change our world. He hopes to use his successes to create a social impact enterprise that will provide greater educational opportunities to typically marginalized and underrepresented groups, harnessing their talents and resources and cultivating the next group of revolutionary ideas and innovations, especially in brain research.