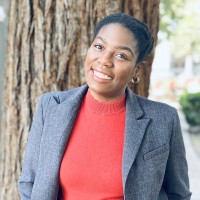 Charday Ife Adams wasn’t born in a typical manner or on a typical day. She entered this world in the back of an ambulance on the 29th day of February, born to be extraordinary.

Outspoken and opinionated by nature, her elementary school teachers told her she would one day become a successful lawyer. But, as she grew older, Charday realized her calling was elsewhere. As a teen she began to use her voice for other purposes, becoming a well-respected spoken word artist in the Sacramento area. Using her poetry as a vehicle for social change she spoke on the inequities in public education before a variety of audiences, including at Harvard, the University of California, and benefactors of the prestigious Crocker Art Museum.

However, Charday is by no means detached from her community. She hails from Sacramento’s underprivileged, but culturally rich Del Paso Heights. It is here she can be found hosting open mics, organizing writing workshops, and in local urban schools representing and presenting the organization she co-founded, Sacramento Area Youth Speaks (SAYS). Charday was recently offered and accepted the position as a member of the Board of Directors for SAYS, where she serves as the Student Outreach Coordinator, making sure that inner city youth have a platform upon which they can express themselves and, in the process, hone their writing, speaking, and performance skills. Her role in this organization includes her participation in professional development seminars that instruct credentialed teachers in the integration of spoken word, and other elements of hip-hop, into classroom instruction. Using her own research, she overcame a teacher’s low expectations and was the first at her school to earn a 4 on an AP history exam.

In addition to her work promoting literacy and culturally responsive teaching throughout the Sacramento region, Charday is the founding president of her school’s chapter of SAYS, student representative for the School Site Council, member of M.E.S.A. and the M.E.S.L. Honors Academy and has earned honor roll status for four years. Recent honors include being selected as the Elk’s Lodge Student of the Month, and her school’s representative at both the African-American Youth Leadership Program and the Northern California Youth Leadership Seminar. She won the North Sacramento Rotary Club Speech Contest, was crowned the champion of Sacramento Area Youth Speaks first annual Teen Poetry Competition, and is currently a member of Sacramento’s National Teen Slam team. Charday has experienced tremendous success as an athlete , including running varsity track since her freshman year and earning the title of League Champion a total of 4 times in her high school career.

In the fall of 2010, Charday plans to enter college studying English, education, and film. Ultimately, she will become a screenwriter, creating films and documentaries that capture the educational experiences of inner city youth. She plans to dedicate her heart, soul, and life to educational reform, creating and supporting grassroots organizations geared toward helping underprivileged youth find their voices and creating venues for those voices to be heard.