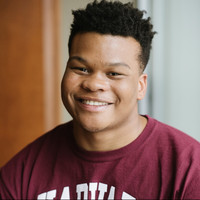 Born in Austell, Georgia, Christian Malachy Porter was welcomed into the world by a host of health issues, ranging from severe bone and joint problems to heart problems. This not only led to the Children’s Hospital of Atlanta becoming his second home but it also created in him a feverish drive to not let the hand that life dealt him inhibit his future success.

From a young age, Christian Malachy was exposed to the importance of education and generosity. After his grandmother passed, his mother, Rowena, took in his cousin, Raymond, and raised him. This, coupled with his mother’s undying love for volunteering despite her disability, instilled a fervent desire in him to help others before himself. At four-years-old, Christian Malachy was recognized as a gifted student and given a hefty scholarship to attend Atlanta International School, a top private schools with a specialized full-immersion language program, and by second grade he was fluent in French. He continued to shine in the classroom throughout school, picking up Spanish and Latin, excelling in his STEM classes and earning a 4.4 GPA in the rigorous IB program.

Due to his health problems, swimming was the only sport he could do, and what started off as therapeutic became his biggest passion. By ten-years-old, Christian Malachy was traveling the Southeast to compete, earning accolades at the regional, state and sectional levels and bursting onto the scene as of the top age-group swimmers in Georgia. As his relationship with the sport dwindled in the latter stages of high school, Christian Malachy decided to use his love for the water to benefit his hometown community. He became heavily invested in volunteering as a summer swim coach and as a weekly swim instructor to children with Down Syndrome at his local YMCA.

As a high-schooler he was appointed to numerous leadership roles on student council and the black student union, as a student ambassador, as a captain and Academic All-American member of the most decorated swim team in school history, as well as a starting forward for varsity basketball. As a junior, along with being named a Questbridge College Prep Scholar and Finalist, Christian Malachy was recognized as one of the top minority STEM students in the nation and invited to attend the MITES program at MIT for seven weeks during the summer where he took classes and conducted research among some the nation’s brightest. It was this life-changing experience that showed Christian Malachy he was not only capable of handling the rigors of higher education, but he was ready to take college by storm.

Because of his own experiences and his desire to help others, Christian Malachy wants to pursue a dual MD-MPH degree to become a surgeon while also revitalizing American healthcare policy to improve health outcomes in marginalized communities. This fall, he will attend Harvard College on it’s world-renowned pre-med track, concentrating in Economics with a focus on Healthcare Economics and a secondary concentration in African-American Studies.