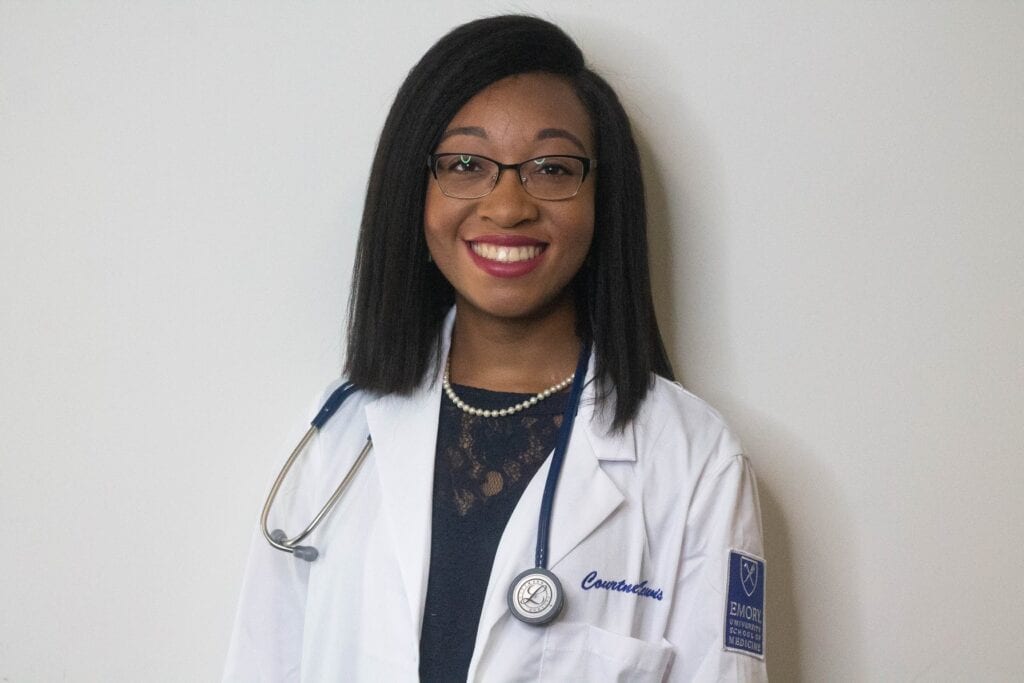 Courtney Lewis developed her passion for learning as a result of two intellectual exposures: reading and science. She began reading lengthy chapter books as early as age five, and enjoyed how books allowed her to escape the confines of the real world to expand her knowledge in the boundless realm of literature. Born in Los Angeles, California, and raised in the geographically diverse region of southern California, Courtney developed a desire to observe and understand the mechanisms of the natural world. Her parents, who have always valued education, encouraged her to pursue her interests and nurtured her intellectual growth.

Courtney’s academic experience has been characterized by attending several schools and making frequent transitions. Despite these challenges, Courtney managed to adapt and excel in each new environment. Reflecting on her student career, Courtney appreciates the variety of classroom experiences she has been exposed to – she has learned to be resilient and resourceful, and to recognize and take advantage of new opportunities. When Courtney and her parents moved to Atlanta, Georgia, where she was admitted into a prestigious preparatory school, she was already poised to immerse herself and flourish in her new academic home.

Courtney did not hesitate to make positive waves at The Walker School. As early as ninth grade, she made history by being the first and only African American female on the robotics team, for which she served as President and had the opportunity to compete in national and world tournaments. She also mentored other black females who wish to pursue STEM careers. Additionally, she excelled in her study of the Spanish language. On the National Spanish Exam, Courtney won state and national rankings for three consecutive years. She applied her language skills to community service when she volunteered for Hands On Atlanta Discovery, an academic enrichment program for minority children. An AP Scholar with Honor, National Achievement Outstanding Participant, and member of all of her school’s academic honor societies, Courtney also participated in Science Olympiad, Academic Team, Student Leadership Council, and other activities in which she held many leadership positions.

During high school Courtney discovered her deep passion for scientific research. She did research at the Clark Atlanta University Center for Cancer Research and Therapeutic Development, where she studied gene expression in prostate cancer cell lines. She was selected to present her independent research paper at the 2015 Georgia Junior Science and Humanities Symposium. She also did research at the Centers for Disease Control and Prevention (CDC) Birth Defects Branch, where she assessed the accuracy of medical information exchanged through popular media platforms and co-authored the paper “Assessment of YouTube videos as a source of information on medication use in pregnancy,” which was published in Pharmacoepidemiology and Drug Safety in 2015.

Courtney continued to follow her passion for science and medicine during her undergraduate studies at Harvard University. She graduated cum laude with a BA degree in Molecular and Cellular Biology and secondary field in Global Health and Health Policy. Outside of class, she participated in a variety of extracurricular activities that reflected her love for learning and serving others. As a member of the Kidney Disease Screening and Awareness Program (KDSAP), Courtney volunteered at mobile screening clinics across the Boston area, serving the city’s many underserved communities and spreading awareness of the high prevalence of kidney disease in disadvantaged populations. She has held numerous leadership positions within KDSAP, including Director fo Programming and Vice President. Courtney also spent several years tutoring international students in English oral communication skills as an English as a Second Language Peer Consultant, which allowed her to share her love for language learning and experiencing different cultures.

Courtney also continued to explore and refine her research interests during her time in college. After her freshman year, Courtney worked at the Lurie Comprehensive Cancer Center of Northwestern University, where she investigated genetic alterations and differential expression of androgen receptor and metabolism genes in bladder cancer to identify correlations with survival outcomes and clinical characteristics. The following summer, Courtney did research at the University of Texas Southwestern Medical Center, where she designed biochemical screening assays to discover molecules that could be developed into chemical probes and cancer therapeutics. Courtney pursued her final college research experience in the Global Maternal and Child Health Research Program at the Harvard T.H. Chan School of Public Health, where she developed a computerized medical diagnostic manual to obtain data on risk factors for morbidity and mortality in Ethiopian mothers and children, and also designed maternal and child health questionnaires for an Ethiopian health surveillance research study.

Courtney is now pursuing her MD at Emory University School of Medicine. She is excited to be so close to fulfilling her dream of becoming a physician, and she looks forward to the challenges and opportunities ahead. Courtney attributes her success to the sacrifices of her parents, her curiosity and desire to challenge herself, and her strong relationship with God. She is excited to use the gift that God has given her to serve her community and make a positive impact in the lives of others.