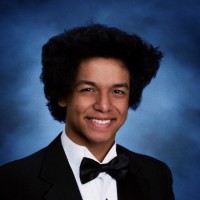 Craig McFarland is a high school senior of Stanton College Preparatory School and was born and raised in Jacksonville, Florida. Although he has already attained an endless list of perfect achievements, scholarships, and perfect scores, Craig describes his past as flawed yet something he wouldn’t change for the world. He was raised by his mother and immigrants in a single-parent household while facing financial hardships as a result of his family being low-income. In his earlier years, his mother worked multiple jobs while trying to earn her Associate’s Degree in order to provide for her three kids. In his 18 years, Craig has already moved thirteen times before his family finally had the means to buy their own house. Through his disadvantaged experiences in his childhood, Craig strives for success in order to help those who, too, have been born profoundly disadvantaged.

Despite such obstacles, Craig soon began to become the embodiment of academic and personal success. Craig is the valedictorian of his high school and will be graduating with the highest weighted GPA and number of credits attained by a senior at Stanton. In addition, Craig has received numerous perfect scores on his standardized tests and constantly strives to perfect any and every academic subject that he encounters. Craig has been featured by the New York Times twice, has been included in more than one hundred publications, and has given talks to kids and parents around the world. Notably, Craig received international recognition after having been accepted into all the Ivy League universities, Stanford, and all other schools to which he applied.

To many, Craig has become a leader and role model – a student who excels academically, athletically, and socially. Craig is an active member of his schools running club, Marathon High, and is a varsity sprinter on his school’s Track & Field team. Throughout high school, Craig has been the leader of multiple clubs, including Co-President of Debate Club, President of his school’s environmental activism club, Team Captain of multiple academic teams like Ethics Bowl, and an officer of many more. In addition, from winning the Florida state High School Ethics Bowl championship, numerous Gold Seals of Biliteracy, and 1st Place in public speaking competitions to receiving a Scholastic Gold Key for his Senior Writing Portfolio and becoming a National Merit Finalist & Scholar, Craig has never been short of achieving success.

Although Craig takes pride in his academic achievements, he cares more about his passions and who he is and has become as a person. Coming from Stanton College Preparatory School – a highly competitive high school where he felt the administration cared little about the students and often swept issues such as mental health, racism, and administrative foul play under the rug – Craig has come to care more about issues such as justice and education. His personability and amiable character are also seen within his own high school, most notably with how he won the title of Homecoming Prince. Craig, as part of the LGBTQ community himself, is a fervent advocate for LGBTQ and women’s rights. Among his passion for social activism, he can be found listening to all of Lorde’s and Forrest.’s discography, watching Adventure Time and Game of Thrones, or eating sushi with his close friends. His most remarkable passion, however, is his love of languages: through his linguistic love, Craig, in addition to his proficiency in English, Tagalog and Ilocano, would become fluent in both French in Spanish and begin to learn Arabic, Italian, and other languages. In fact, in his senior year of high school, Craig was able to skip six years of Spanish and immediately take IB Spanish 6 due to his acquired proficiency in the language in just one summer. In college, Craig hopes to expand his knowledge of languages while furthering his passions in calculus, philosophy & ethics, biochemistry, and law.

Craig will be attending Harvard University in the Fall. After undergraduate school, Craig strives to attend either law school or medical school. Although unsure of his future profession, he hopes of going into a profession where he can effect true change. When asked what was his biggest aspiration in life, he immediately remarked “to be a good father” – a true testament to the unique heart of Craig McFarland.