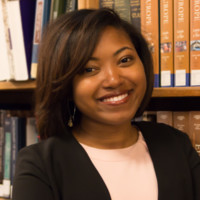 Dasia Moore has been well acquainted with the power of learning since her birth to second-year law students at North Carolina Central University. She thrives in the legacy of her parents’ hard work by seeking academic and intellectual challenges whenever possible. Dasia’s desire to reach her full scholastic potential has led her down a non-traditional educational path, which has included at-home, private, magnet, public, and all-girls college preparatory boarding schools. In each of these settings, she has excelled.

Dasia has devoted herself to exploring a variety of subjects. In her sixth year of French study, she achieved national ranking on the National French Contest, was inducted into a French Honors Society, and served as a minister for her school’s French club. Dasia has also met with success in writing: she is an editor of her school newspaper and a board member for the literary magazine. She is an avid poet and has developed her talent through three years of independent study in creative writing. Dasia’s other interests include history, singing, theatre, and cross-country.

Dasia’s dedication has been rewarded with Principal’s, Dean’s, and Rector’s List recognition since elementary school. She has also been awarded a number of leadership and academic scholarships, including a full-tuition merit scholarship to attend boarding school at Chatham Hall and financing for a summer immersion program in France.

In addition to her academic success, Dasia’s character and kindness also distinguish her. She is a servant leader in every sense and is deeply gratified by helping others and contributing to the improvement of her home and school communities. As president of her school’s Student Honor Council, Dasia promotes change by representing students to the Deans and faculty. She volunteers at local schools, Head Start, and Habitat for Humanity. Dasia brings compassion and cheer to whatever she does. When asked to describe herself in two words, Dasia chose ‘constantly smiling.’

Dasia, the oldest of seven children, has moved sixteen times in her life. Cities in North Carolina, Tennessee, Georgia, South Carolina, and Virginia have all been her warm but temporary homes. Dasia embraces the invaluable lessons in fortitude that her experiences have taught her, despite the challenges of frequent transition. As an older sister, she has developed her leadership skills and perfected the art of compromise. Through her diverse upbringing, she has acquired a love for travel and culture. Combined, these traits contribute to Dasia’s passion for global affairs.

Dasia plans to study International Relations at the undergraduate and graduate school levels; she also intends to pursue a law degree. Her ambition is to work for the United Nations or U.S. Department of State; she is determined to be part of the process that works to unite people of all nationalities, religions, and ideologies. Dasia hopes to use a career in diplomacy to advocate for human rights as her grandfather, an early civil rights activist, taught her.

Dasia is a lifelong learner whose most important goal is to use her education and opportunities to lead and support others.