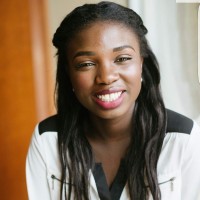 Born in Togo, West Africa, at the young age of five, Delali immigrated along with her, then, family of five to the United States to pursue greater educational opportunities. During her childhood, Delali quickly noticed the inequality between men and women in her community; men were held to a standard of excellence that women were not encouraged to attain. Delali witnessed the condemnation her mother faced because she had four daughters instead of sons. It was a bitter reality that even in the 21st century, women were not seen as rivals to men. However, this inequality only fueled Delali’s pursuit of excellence; she vowed that in whatever domain she operated in, she would master it.

Delali displayed her intellectual prowess at a very young age; she was one of 60 students selected in her county to attend both a magnet middle and high school. Her academic successes have gained her positions not only in the National Honors Society, but Math, French, and Social Studies Honors Societies respectively. By the grace of God, Delali was one of few selected nationally as an AP Scholar and a LEDA Scholar.

Delali currently attends Poolesville High School, the number one school in Maryland, where she is one of only two African Americans in her magnet program. Despite being a low income African American female, Delali continues to excel academically and fight the stigma that women of color cannot be intellectuals. Junior and senior year Delali took 6 AP courses ranging from AP Chemistry to AP Art History, and even some beyond AP courses like Biochemistry and Cellular Physiology.

Outside the classroom, Delali consistently dedicates many hours over the course of a year preparing for Chemathon, a statewide chemistry competition. Also a member of the National Society of Black Engineers, Delali uses computer software to create products that she designs in order to submit to regional championships. Furthermore, Delali is a student athlete, competing in cross country and track all year round. As a varsity runner and co-captain of her cross country team, she has competed in the state championships for the past three seasons.

Delali’s most rewarding pursuit is being a caretaker for her three younger siblings. Passionate about empowering other girls, Delali serves as a role model for them and other young girls in her community whom she mentors and tutors. Many of the girls Delali tutors express their doubts about college but Delali reassures them they can and will thrive in places of higher learning. As a product of many community based organizations, Delali believes it is crucial to share the knowledge she has acquired. She is an avid believer that with the proper resources and support, women will not only match but surpass mean in all realms.

Delali aspires to study biomedical engineering in college and later pursue a medical degree to become a physician. Although the road ahead of her is long and arduous, Delali finds joy in serving and empowering others in her community to become trailblazers.