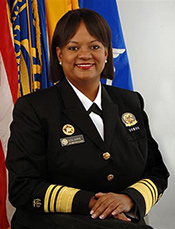 Regina M. Benjamin, MD, MBA is the 18th Surgeon General of the United States. As America’s Doctor, she provides the public with the best scientific information available on how to improve their health and the health of the nation. Dr. Benjamin also oversees the operational command of 6,500 uniformed public health officers who serve in locations around the world to promote, and protect the health of the American People.

From her early days as the founder of a rural health clinic in Alabama – which she kept in operation despite damage and destruction inflicted by hurricanes Georges (1998) and Katrina (2005) and a devastating fire (2006) – to her leadership role in the worldwide advancement of preventive health care, Dr. Benjamin has forged a career that has been recognized by a broad spectrum of organizations and publications. She currently serves as chairman of the National Prevention Council, making her the first U.S. Surgeon General in history to bring together seventeen federal agencies to develop a National Prevention Strategy.

Dr. Benjamin has a B.S. in chemistry from Xavier University, New Orleans, an M.D. degree from the University of Alabama at Birmingham and an MBA from Tulane University. She attended Morehouse School of Medicine and completed her family medicine residency in Macon, Ga.  Dr. Benjamin holds 15 honorary degrees.

Dr. Benjamin is former associate dean for Rural Health at the University of South Alabama College of Medicine in Mobile and past chair of the Federation of State Medical Boards of the United States. In 1995, she was the first physician under age 40 and the first African-American woman to be elected to the American Medical Association Board of Trustees. She served as president of the American Medical Association Education and Research Foundation and chair of the AMA Council on Ethical and Judicial Affairs. In 2002, she became the first African-American female president of a state medical society in the United States when she assumed leadership of the Medical Association State of Alabama.

Dr. Benjamin is a member of the Institute of Medicine – the health arm of the National Academy of Sciences, which was chartered under President Abraham Lincoln in 1863. She is a fellow of the American Academy of Family Physicians. She was chosen as a Kellogg National Fellow and a Rockefeller Next Generation Leader. Past board memberships include the Robert Wood Johnson Foundation, Kaiser Commission on Medicaid and the Uninsured, Catholic Health Association, and Morehouse School of Medicine.

She was named by Time magazine as one of the “Nation’s 50 Future Leaders Age 40 and Under.” She was featured in the 1995 New York Times article, “Angel in a White Coat;” the December 1999 cover of Clarity magazine; in the 2002 People magazine’s article, “Always on Call;” and was featured on the January 2003 cover of Reader’s Digest as one of the national publication’s “Everyday Heroes.” She was also named “Person of the Week” on ABC’s World News Tonight with Peter Jennings, and “Woman of the Year’ by CBS This Morning.

In 1998, Dr. Benjamin was the United States recipient of the Nelson Mandela Award for Health and Human Rights. She received the 2000 National Caring Award which was inspired by Mother Teresa and was recognized with the Papal honor Pro Ecclesia et Pontifice from Pope Benedict XVI. In 2008, she was honored with a MacArthur Genius Award Fellowship. In March, Dr. Benjamin became the recipient of the 2011 Chairman’s Award during the worldwide broadcast of the 42nd NAACP Image Awards.