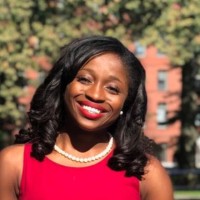 Her name is Faith Angela Imani Tamara Hope Nebechi Jackson. Her first five names are an acronym for FAITH, and yes, they all appear, along with her other two names, on her birth certificate. Her name is not evidence of insanity or the product of indecisiveness, but a way for several separate entities to be placed together to work cohesively. Her name is not just what appears on this profile, or what her fellow Varsity team members yell when she needs to hurry up and pass the ball on the soccer field; her name is the story of her life.

With interests as diverse as her seven-part name, and her multicultural heritage, Faith has always been a person who represented multiple perspectives and participated in many programs and activities. From a young age, Faith was always interested in government and public policy. She enjoyed passing out literature with her mom on Election Day, and tele-banking and going door-to-door canvassing throughout campaigns. Eventually, as a junior in high school she earned an internship with the Maryland Democratic Party, and now serves in multiple capacities, specifically as a State Page in the Maryland General Assembly and the Chair of the Prince George’s County Young Democrats High School Caucus because she feels that civic engagement is key, especially for the youth. Evidently, her interest in politics and policy never dwindled, but eventually she discovered that one of the biggest problems we face is that those who are interested in policy and issues are not technically and scientifically trained to fix such problems, and those who are scientifically and technically trained to fix them are not interested in policy.

This discovery sprouted Faith’s adjunct interests in science and engineering. Such interests are what lead her to apply and be selected for the Science and Technology Program at Charles Herbert Flowers High School. As a student in this magnet program, Faith has participated in a plethora of related extracurricular activities and internships in an effort to work towards being able to not only identify problems, but provide solutions. She has done everything from serve as the secretary of her school’s chapter of the National Society of Black Engineers, to complete a grant-funded project at the Monell Chemical Senses Center in Philadelphia, Pennsylvania testing the effects of Mono-sodium Glutamate on the body composition of rats.

As time progressed, Faith began to realize that her interests in science, engineering, and government did not have to contradict each other, but could be combined, like her holistic name, to produce interdisciplinary experiences and solutions. Subsequently, Faith has spent the last year interning as one of three students in the Adopt-a-Scientist Pilot Program at the United States Department of Agriculture, and is working to engineer an organic mosquito repellant. Her project has warranted her to do everything from work arduously in the field, to conduct mosquito bioassays, and once completed, can help fight viral diseases such as malaria. Faith enjoys working on her project not only because she is able to progress towards a solution for a devastating problem, but because she is finally able to satisfy her interdisciplinary interests by having the unparalleled experience of conducting scientific research at a government agency, and serving as a full-time federal employee.

Finally, Faith has been able to use her multiple interests to help and be involved in her community in as many ways possible. She has used her interest in policy to help her advocate for and represent students across her school district as the Student Member of the Prince George’s County Board of Education, and her interests in science and engineering to tutor her peers in such crucial areas. She stays engaged in the community as a Girl Scout and a member of the National Honor Society, and has done such things as conduct a voter registration drive in her school district, and help initiate a recycling program at her school. She hopes to continue such multidisciplinary studies and engagement at Harvard College, where she has been accepted to attend this fall. Ultimately, in terms of her name, her interests, and herself as a whole, Faith Angela Imani Tamara Hope Nebechi Jackson always strives to ensure that, in the words of the great Aristotle, “the whole is greater than the sum of its parts.”