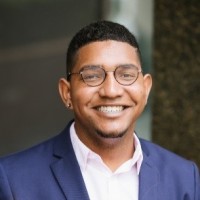 The only American-born member of his family, Garry quickly had to learn to put into practice the American concept of blazing trails rather than following them. He is the youngest of Zamira Humphries, a woman who is beautiful, headstrong, fierce, and wanted her son to be someone in complete grip of his future through education. Garry wanted to ensure his mother’s efforts of moving to a complete alien country weren’t for naught, so, for himself and for his family, Garry decided to use his present as a means to better his future.

He grew accustomed to letting the endless comments his peers justified with facetious intent simply wash over him. Said comments served to become more reasons to not allow himself to feed the prejudice, the stereotypes against his race and ethnicity, because the only product Garry would become is one of his hard work and dedication.

Garry suffered from a stroke the November of his sophomore year. The countless challenges, setbacks, and inconveniences resulting from this stroke would’ve been enough to disillusion and discourage any student, but Garry recuperated and returned to school with a renewed appreciation for and understanding of the importance of adaptability and perseverance. It was a lesson taught on an intense and extreme scale, but a lesson nonetheless of strength and the importance of working hard and looking forward, always.

The rigor of his schedules only increased and the impact and value of his extracurricular activities have been profound. Today Garry is the founder and CEO of non-for-profit Bord Incorporated dedicated to helping diffuse viable information regarding AP classes and dual enrollment to students from underrepresented backgrounds. In addition, he founded and is the president of Science Bowl/Brain Games and is the treasurer of National Honor Society and Future Business Leaders of America.

However, on top of excellent extracurricular, excellent academic integrity and achievement, excellent standardized testing scores, Garry is a genuine, driven, personable friend who inspires and encourages all around him and has touched the lives of many in a grand spectrum of ways. His mother is tremendously proud of her son, a boy born to a one-parent home, gratified for her her decision to move to the United States of America and raise her children in a country with at least the intention for opportunity. His close friends are proud to see him, their always modest and determined friend, successful, reaping the success of the hard work he fervently sowed. Attendees of his same high school, while maybe not close acquaintances, know of Garry Archbold and are inspired by the living, walking success story, proof of the power of education and the power of believing in oneself.