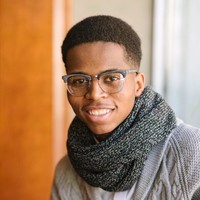 While Grant was in his mother’s womb, she was violently assaulted by his father, and as a result, he was born with ataxic cerebral palsy, a developmental disorder that affects motor function and is caused by damage to the brain. Growing up below the poverty line, in and out of custody trials, and physical and occupational therapy, Grant was the epitome of the stereotypical black male in America. Statistically, he was destined to become another unfortunate menace to society. While many considered him a victim, he always considered himself to be a survivor. He survived and thrived in spite of the tumultuous and violent environment to which he was exposed.

Although his hometown is now Macon, GA, Grant was a transient student, moving to a new school nearly every year of his educational career until he enrolled in high school. The only source of consistency in his life resided in his family. In particular, his mother was the vital factor that impacted his life the most. She placed a profound emphasis on education and taught him arithmetic and how to read before Pre-K. He was placed in the gifted program in 1st grade. He watched his mother complete her Master’s and Specialist degrees in Educational and Teacher Leadership while pregnant with his little brother and sister while she simultaneously worked full-time. He also watched proudly as she applied to and was recently accepted into a fully-funded PhD program in 2018. From her example, Grant developed a sound work ethic and stoic perseverance.

Most of the traits and experiences that shaped Grant during his childhood were beyond his control; however, during his adolescence, he refused to let his circumstances define him. He began instead, to shape his own circumstances. In spite of his distinctive intellect, Grant disagrees with the proverb, “Knowledge is power.” He firmly believes that knowledge is only powerful when it is applied. Starting in the seventh grade Grant began to blaze a trail of success and build a legacy of leadership with his mind. He spearheaded Ben Hill Middle School’s first robotics program and led his team to the all-state level of competition. In the eighth grade, Grant and his older brother endured racism and prejudice at an all-white private school in South Carolina. They rode their bikes to school and they were sabotaged by students more than three times that year among other cruel acts. In spite of those experiences, he was appointed leader of various school organizations and was at the top of his class academically. When Grant enrolled in Howard High School, he immediately got involved in the community and school organizations. He was appointed by teachers and peers to emcee the school’s first high school talent show. He became section leader of the saxophones in the marching band for two consecutive years, and was the Treasurer for his junior and senior class. He was and still is an active member of nearly every extracurricular organization at the school and has excelled at every level. Grant has transformed from the individual who was profusely bullied and ridiculed in his childhood to a beacon of inspiration and a shining example of success among his peers.

Perhaps the organization that has played the largest role in Grant’s life is the Georgia Civic Awareness Program for Students (GCAPS). After being accepted in the fall of 2016, the director of the program, and Assistant County Manager, Charles Coney told the delegation, “You shape your own opportunities. Your experience within this program is your own creation.” Within this program, Grant has networked with various elected officials and business leaders around the world. He met the illustrious Ambassador Andrew Young, CEO of MasterCard, Ajaypal Banga and received the key to the city of McDonough, Georgia. Additionally, he traveled to New York and Germany conducting a case study on Human and Civil Rights through cultural exchange. He traveled to the United Nations’ Headquarters and the United States Embassy and German Mission and Parliament and spoke to various elected officials and business leaders. Also, during the Summer and Fall of 2017, Grant took part in the GCAPS excursion to Japan. The delegation had a private audience with the Emperor of Japan as well as many other public servants and officials.

Today, the extent of Grant’s influence and network spans the globe. Grant was awarded the illustrious and exclusive Commissioner Bert Bivins III Community service award, an accolade that is awarded to only one individual every year for outstanding and superlative leadership and dedication to community service. Grant currently holds the title of Alumni Leader and is an instrumental member of the 2017-2018 GCAPS delegation. In light of all of this, personal success is not Grant’s priority. His primary life goal is to change the world, make it a better place, and help and inspire people to succeed and thrive in spite of their circumstances. As for his secondary goal, he remains in his constant effort to give to his family, particularly his mother, a grand and magnificent life in return for the wealth of sacrifices she made in order to shape him into the person he is today.