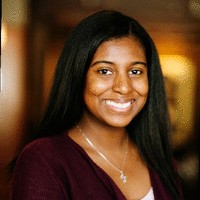 Haleigh Quinn was born in Denver, Colorado. As the daughter of an incredibly industrious and compassionate single mother, the values of hard work and generosity were instilled in Haleigh early on. As a child, Haleigh was often found with her nose buried in books. It was through her favorite books that she was first inspired to combat the systemic injustices affecting communities of color.

Her inspiration transformed into action, when, at the age of ten, Haleigh’s school district awarded her a mentorship opportunity with a noted civil rights attorney. Spending weeks in courtrooms perched on the edge of rigid, wooden pews, Haleigh fell in love with the judiciary process, appreciating the fierce and passionate advocacy for justice, diversity, and equity.   Progressing through her academic career, Haleigh exhibited an extraordinary affinity for learning. Her insatiable curiosity and tremendous work ethic fuel her successes at Stanford. She has taken much joy in participating in courses ranging from Afrofuturism and Black Science Fiction, to Data Science and Introductory Economics.

While Haleigh demonstrates an endless dedication to her education, she is proud of her successes as both a community leader and activist. As a former district representative on the Student Board of Education, Haleigh acted as a much-needed liaison between students of color and their Board of Education representatives in the underserved Denver Public School system. Throughout her career as a Student Board Representative, Haleigh has facilitated student-led forums with prospective legislators, organized campaigns opposing gun violence, and proposed legislation on restrictive proximity measures for marijuana dispensaries and liquor stores in her community.

Haleigh maintained her commitment to equity in her transition to Stanford University, where, within the first weeks of school, she began a position as a Classroom Director at the Palo Alto based education non-profit, Dreamcatchers. At Dreamcatchers, Haleigh demonstrates an immense love for her students and her job. She teaches math, science, and writing to low-income minority students from East Palo Alto. Eager to engage in all the opportunities Stanford has to offer, Haleigh sought a position at RISE Colorado, an esteemed non-profit organization that educates underserved communities on the issue of the opportunity gap, through Stanford’s community service work study program. As an intern at RISE, she works to support community organizers in empowering parents to become active advocates in their children’s education.

Haleigh is excited to begin her Sophomore year at Stanford, where she will continue to explore her  interests in Public Policy and law. She looks forward to her new position as a Frosh 101 course coordinator in the Fall, where she will assist other freshmen in their transition to Stanford.