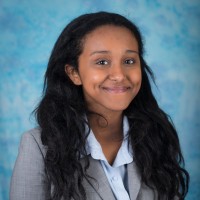 Hana Kiros is a young woman bursting with enthusiasm, and optimism. Much of this disposition is rooted in her deep seated belief in the capacity for technology to fuel positive change. It is also fueled by her belief that most people, when empowered to do good, typically do.

Hana has been raised in Tallahassee, FL by a mother that has taught her the importance of maintaining hope and humor in the face of adversity. Within Tallahassee, she has found ample opportunities to indulge her love of science and technology. Of these, Hana describes her work at the National High Magnetic Field Laboratory – the largest and highest powered magnet lab in the world – as having been the joy of her high school career. Through her work here as a Condensed Matter Research Assistant, Hana has conducted a spectral analysis of synthetic diamonds utilizing Raman spectroscopy. She has also written programming in C++, UNIX, and LabVIEW to wirelessly automate the tuning of a laser employed in such analyses. The latter of these two projects has occupied the majority of the four years Hana has spent at the MagLab. Working in automation has convinced her of technology’s transformative capabilities, and has ingrained in her the value of applying scientific incrementalism to manageably and robustly address sources of human suffering.

Additionally, Hana has conducted original research at her local HBCU, Florida A&M University. She has had the honor of representing this university at the 2017 International Energy-Water-Nexus Summit, at which she presented a meta-analysis of the proteomic methods employed to study biofuel feedstocks to an international audience.

When reflecting upon her life, Hana cannot help but note the profoundly positive impact mentorship has had on her personal development. In order to pay this forward, Hana has founded the educational non-profit, CodeCaravan. CodeCaravan utilizes programmable microrobots to conduct in-school, interactive presentations that introduce underserved elementary schoolers to computer science principles. In addition to generating excitement for computer science, Hana works to cultivate technical expertise through instructing two classes of young girls attending predominantly black elementary schools weekly, in order to prepare them to attain IC3 Spark Digital Literacy certification. With regard to this experience, Hana notes being constantly impressed by her students’ humor and insight, and by how cool it feels to be called “Ms. Kiros”.

Hana also believes that all times are interesting, and that it would be a shame for anyone to actively disengage from interesting times. That being said – she is a current events fanatic, as well as the originator of a local NPR series airing throughout Florida and Georgia: “Common Sense: Teens Take on Politics”. As a regular panelist on this program, Hana uses this platform to engage meaningfully in local and international politics. Having aired it’s 20th episode this month, Common Sense has reached an audience of 140,000.

In her spare times, Hana enjoys memorizing rap lyrics, and hanging out with her friends, who are admirable and awesome. She plans to study computational neuroscience at Harvard this fall.