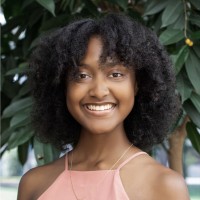 Iman Dancy was born in Goldsboro, North Carolina to Earl and Michele Dancy. In 2002, Iman’s parents relocated her family to Raleigh, North Carolina in the hopes of securing better educational opportunities for their three children.

Iman began her education in Raleigh at Hunter GT/AIG Elementary School, followed by Ligon GT Magnet Middle School. At both schools, Iman was heavily involved in the performing arts (primarily theatre), writing, and student leadership —serving as a student ambassador at Hunter and as a Student Council representative during her three years at Ligon. She continued exploring each of these realms at Enloe Magnet High School, where she enrolled in 2015 and will graduate from this June.

It was within the walls of Enloe that Iman was first introduced to many of her present-day passions. In the fall of her sophomore year, Iman joined a student organization that now operates under the name Conversations In Dialogue (CID); CID is a student-led nonprofit that aims to facilitate and foster an appreciation for honest and empathetic dialogue between diverse voices.

That same year, Iman began her tenure as a writer for The Eagle’s Eye, Enloe High School’s official newspaper. She served as Features Editor for the publication last school year, and she currently holds the position of Editor-in-Chief. As Editor-in-Chief, Iman has proudly promoted an agenda of diversity and inclusivity in the paper, imploring her staff writers to shed light on the stories of oftentimes-overlooked communities at Enloe.

This agenda directly connects to the work that Iman has done with the Enloe Student Equity Team, an organization she has been actively involved with for the last two years. The group aims to combat the school’s “two school phenomenon”—the divide between Enloe’s predominantly black and Latinx “base” population versus its white and Asian “magnet” population—by devising equity-building strategies to be employed in classrooms. It was also during her junior year that Iman co-founded the Enloe Civil Liberties Alliance (ECLA), a youth-led civil rights defense group.

In 2018, Iman received both the Yale Bassett Award for Community Engagement and Matthew J. Quinn Youth Leadership Award for her advocacy work.

Additionally, Iman has also found great interest in Chinese language and culture over the years. She began her studies in Chinese I as a freshman, but she self-studied and advanced to the Honors Chinese III level during her sophomore year. To further sharpen her language abilities, in 2017, Iman enrolled in the Middlebury Language Academy Chinese Summer Program, a four-week immersion program for high school students. She was named one of ten winners of the 2017 Confucius Institute People to People National Honors Award for her commitment to Chinese studies.

Iman will matriculate to Yale University in the fall, where she is currently interested in furthering her Chinese studies and majoring in Ethics, Politics, and Economics (EPE). After undergraduate school, Iman aspires to obtain her Master of Public Policy (MPP) and JD with the aim of one day pursuing a career in constitutional law and local-level policymaking.