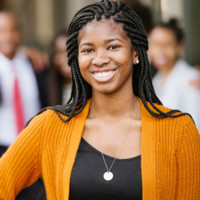 As a first generation American and the daughter of two Jamaican immigrants, Isis Anderson has been greatly motivated by her family’s lack of opportunity. Her grandmother’s highest level of education was sixth grade, and her mother was forced to leave college in her first year because of a brain tumor. Watching her mother raise her three siblings as an independent, single mother—despite lacking a college degree—has convinced Isis that, with her mother’s work ethic and a better education, she can accomplish almost anything.

Ever since third grade, Isis has attended predominantly black and Hispanic, low-income charter schools called Elm City and Amistad. In addition to her family, the charter schools Isis have attended developed her thirst for knowledge, and she genuinely enjoys learning. Whenever the school year ends, Isis’s desire to learn does not. During middle school, she spent day after day in the library reading. During her freshmen year of high school, she partook in Choate’s chemistry program. The summer after her sophomore year, Isis participated in a two-week program called Yale Young Global Scholars where she learned about international affairs and security. During her junior summer, she was a part of the Leadership Enterprise for a Diverse America (LEDA), a seven-week intensive college guidance and leadership program at Princeton University.

At Amistad High School, Isis is known for having lots of pride as a black woman. Isis is always encouraging others to love their identity and work towards social justice through her advocacy of marginalized groups and intersectional feminism. Through her leadership roles, she is able to use her passion for social justice to engage others in supporting equality and understanding for everyone.

Currently, Isis is the president of her high school’s Student Government Association. She is also the captain of both her varsity soccer and basketball teams, and she is the starting midfielder for the varsity lacrosse team. Beyond institutional roles, Isis utilized her leadership skills to spearhead a rally involving more than 100 students to increase diversity amongst teachers and improve retention rates of teachers of color. Because of the rally, the New Haven District was influenced to partner with the NAACP in addition to creating a pipeline program for minority teachers through HBCUs. Furthermore, Connecticut senators signed Senate Bill 379 dedicated to minority teacher recruitment. Through participating in food and clothes drives to hosting multiple rallies centered on diversity and unity that strengthen the youth’s sense of identity, Isis has exemplified a certain responsibility and commitment to contribute to making New Haven the best it could be, rather than passively accept the way it is now.

Isis believes that a lack of equal access to education is plaguing the world. Without education, people are more likely to remain in a state of ignorance, which helps to maintain institutions of oppression. Isis wants to expand access to a quality education, which, in turn, will develop better leaders who will improve the world. Isis hopes to become one of those leaders.