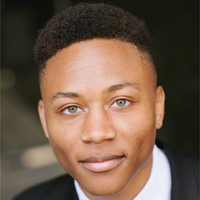 Originally from Orlando, Florida, Jalen Johnson is a senior at Discovery High School in Newton, North Carolina. Jalen has grown up in Conover, North Carolina, a small town of approximately 8,000 citizens. He is the son of Jerry and Alanda Johnson and he has two younger twin brothers – Brandon and Tyler. Jalen is a proud African American young man who enjoys giving back to his community in whatever ways he can.

As the son of first-generation college students, Jalen’s parents have always emphasized the importance of attaining a good education. Jalen has challenged himself throughout high school, taking honors, Advanced Placement, and dual enrollment courses through the local community college. Jalen has been an A honor roll student all four years of high school and he attributes his academic success to the support of his friends, family, and educators.

Jalen has been involved in a variety of extracurricular activities throughout high school. He is a member of Student Senate, where he serves as the Student Body President. Jalen is also Treasurer of the Beta Club, member of National Honor Society, and he is the President of the Catawba County Youth Council – a commissioner appointed youth committee with representatives from each high school in his county. As a member of the varsity track and field team all four years of high school, Jalen accredits track with teaching him the character traits of dedication and commitment. As a competitor at the local, state, and national level, track has been a significant extracurricular activity throughout Jalen’s four years of high school.

From a young age, Jalen says that his parents stressed the importance of giving back. Furthermore, as a student at Discovery High School, Jalen was required to attain 150 community service hours prior to graduation. Jalen believes that this requirement helped fuel his passion for community service, furthering his future career aspirations. Jalen has seen the effects that government has on individuals lives, including his own. Through volunteering with local government agencies in his community and conducting an internship with the City Manager of the City of Newton, Jalen firmly believes that he wants to pursue a career in public service.

Thus, he hopes to work at the state or local level in politics, where he believes that he can make a positive impact on the lives of many people. Jalen intends to major in either political science or public policy and he plans to pursue graduate school after his undergraduate studies are complete.

Now that he is on his way to college, Jalen hopes to take all of the lessons that he learned throughout his time in Conover and apply them in his future endeavors. However, he is also ecstatic to experience what the world has to offer outside of Conover and bring those experiences back to his community to inspire those around him.