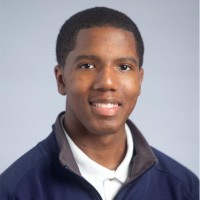 Jason Brown is a low-income scholar from Detroit and Kansas City who lives to contribute to Black Excellence. Since 5th grade, Jason has aspired to attend Brown University despite the world around him screaming that it was impossible. Jason attributes this goal to his mother, who encouraged him to reach for the stars and see where he landed.

In 7th grade, Jason was reading two grades below grade level; many students would’ve become discouraged at this lack of progression, but not Jason. With fortitude and support from his loving family and school teachers, Jason went from a student left behind to aspiring author, psychologist, and leader of the Black community. To succeed, Jason had to think outside the box, or rather, outside the classroom.

During his freshman year at the Ewing Marion Kauffman School, Jason scored a paid internship with Husch Blackwell LLP, becoming the first person from his school and his family to work at a law firm – he was only 15. While working at Husch, Jason served as the youngest Juror in Mock Trials, gaining experience by shadowing real cases in mediation. Based on his work at the firm, he was offered a position following his sophomore year.  While Jason worked for the firm the following summer, he attended the UMKC Summer Scholars program (STEM), exploring his passion for psychology.

During the summer following his junior year, Jason participated in the Leadership Enterprise for a Diverse America (LEDA) Program at Princeton University for 7 weeks to grow his leadership skills. There, Jason collaborated with LEDA and the Kauffman School to develop a school club that assists 8th graders transitioning to high school levels of reading and writing.  Jason hopes the club will become a student-run legacy that supports generations of students after him.

While in high school, Jason has been Vice President of Student Council, a member of the National Honors Society, a member of the College Board’s College Youth Advisory Council, and a QuestBridge College Prep Scholar. However, Jason’s true passion is writing fiction. Jason founded the Kauffman School Literary Magazine, Kalopsia, and assumed the Creative Fiction Editor position. Jason is also the Lead Copy Editor of the Yearbook Club and maintains his own writing portfolio website to publish his short stories online. His biggest writing accomplishment to date is completing a 200-page manuscript that pioneers a new genre in literature: Young Adult Afro-Fantasy.

Jason lives with his mother, brother, and grandparents, where he cares for his grandmother, who suffers from severe arthritis, and his grandfather, who suffers from Alzheimer’s disease. Jason’s family joined together in one household when his mother’s home was seized by the bank just after his home was robbed. Understanding what a perilous housing situation can feel like, Jason supports his community by being a Harvester’s store captain, collecting canned-goods for homeless families.

Now at the end of senior year, Jason has met many personal goals: earning straight A’s in high school, contributing positively to his community, and being admitted to Brown University!