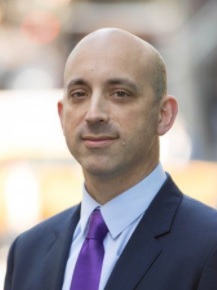 Jonathan Greenblatt, the CEO and sixth National Director of the Anti-Defamation League (ADL), is an accomplished entrepreneur and innovative leader with deep experience in the private, public and non-profit sectors.

As chief executive of ADL, Jonathan leads all aspects of the oldest anti-hate organization in the world and has transformed the organization, reinvigorating its programs, modernizing its operations and expanding its impact. In 2016, he launched Never Is Now, the largest annual conference in the world on antisemitism and hate. In 2017, he started the Center on Technology and Society in Silicon Valley, putting ADL at the forefront in the fight against cyberhate. In 2018, ADL and the Aspen Institute launched the Civil Society Fellowship program to convene diverse leaders across ideological lines. In 2020, ADL convened the civil rights community to launch Stop Hate for Profit to combat racism and hate on social media. Jonathan has been recognized for its leadership at ADL: he has been named to  the NonProfitTimes “Power & Influence Top 50” list for five consecutive years, from 2016 to 2020.

Prior to heading ADL, Jonathan served in the White House as Special Assistant to President Obama and Director of the Office of Social Innovation and Civic Participation from 2011-2014. In this role, Jonathan drove the national service agenda, led public-private partnerships and headed the impact investing agenda for the Obama Administration. He co-chaired the landmark G8 Global Task Force on Social Impact Investing that launched the Global Steering Group for Impact Investing.

Jonathan came to the White House after a long career as a serial social entrepreneur and corporate executive, starting and scaling businesses focused on creating economic value and social good. He co-founded Ethos Brands, the business that launched Ethos Water, the premium bottled water that helps children around the world access clean water. Ethos was acquired by Starbucks Coffee Company in 2005. Following the acquisition, Jonathan was named vice president of global consumer products at Starbucks and joined the board of the Starbucks Foundation.

Jonathan also founded All for Good (AFG), the open data platform designed to enable more people to serve. Incubated at Google, AFG was one of the largest databases of volunteer opportunities on the Internet. AFG was acquired by Points of Light in 2011.

Prior to AFG, Jonathan served as CEO of GOOD Worldwide, a diversified media company whose products include the award-winning GOOD Magazine and the popular website GOOD.is. Earlier in his career, he worked as an executive at REALTOR.com, joining the company as a product manager and eventually heading up its consumer products unit. REALTOR was acquired by News Corps in 2014.

Jonathan has been an advisor, investor and board member of numerous startups, including Kevita (acquired by Pepsico, 2014), EcoATM, and Flying Embers. In addition to his service as a trustee of the Ron Brown Scholars, Jonathan has served on numerous non-profit boards, including the African Leadership Foundation, KaBOOM!, The Asian-American Foundation, and Water.org. He is a member of the 2006 class of Henry Crown Fellows at the Aspen Institute and is a Next Generation Fellow of the American Assembly.