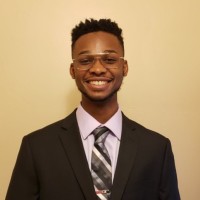 Kahmile Whitby was born into a family with three absentee fathers between him and his four siblings. Early on, his family moved frequently between apartments and homeless shelters. At age four, Kahmile, his three brothers, and sister came to live with their Grandfather, whose wife passed due to breast cancer that very morning, and their uncle. Though life improved for Kahmile and his siblings, the great responsibility of caring for five children proved incompatible with his Grandfather’s work schedule, causing him to lose his job. Soon, several other predicaments further complicated life at home. Despite this, the Christian faith Kahmile developed in his new home has always grounded him, made him more thankful, and has been a constant source of joy, strength, and peace.

While enrolled in the gifted program in middle school, Kahmile began purposefully working with his grandfather and older brother doing HVAC work to provide for the family. These experiences cultivated Kahmile’s sincere appreciation for his Grandfather’s extreme diligence and sacrifice to ensure a better future for him and his siblings. His Grandfather’s lived experiences, particularly those of oppression and his family’s hardship growing up, have been both inspiring and humbling for Kahmile. This is especially true regarding the educational opportunities his Grandfather had been denied. Additionally, Kahmile’s occasional visits to see his mother forged a deeper connection with his impoverished past. All of these were indispensable in developing Kahmile’s drive to secure something better through education.

After being accepted to the Leadership Center for the Sciences and Engineering (LCSE) high school specialty program, Kahmile heavily employed this heightened motivation. Kahmile began to regard academic challenges as incomparable to the obstacles he had already overcome. This motivation also enabled Kahmile to overcome the degenerative visual impairment he had been diagnosed with in sixth grade.

Since then, Kahmile has identified his passion of Mechanical Engineering due to his school’s FIRST robotics team, the advanced STEM courses he has had the opportunity to take, and constant exposure to his Grandfather’s craft. Every summer, Kahmile has opted to take advantage of several academic programs to further his career and college preparation, including Upward Bound, the NC STEM camp for VIB students, the Yale Young Global Scholars program: Applied Science and Engineering Session, and the Leadership Enterprise for a Diverse America’s Summer Institute.

Kahmile has received numerous honors, including the AP® Scholar with Distinction Award, Most Outstanding Student in Physics and Spanish, the President’s Award for Educational Excellence, and was a local finalist for the Chemistry Olympiad. He volunteered for the Horizon’s Hampton Roads summer program, of which he is an alumnus, and has tutored for his school’s peer tutoring program. He is now the Mechanical Team Captain of the school’s Robotics team and President of the Spanish Honor Society. He endeavors to pursue a degree in Mechanical Engineering initially at MIT, through to a terminal degree. Kahmile will be the first in his family to graduate from college and aims to provide the same opportunity for other disadvantaged students.