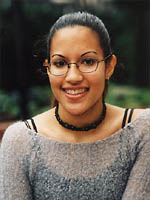 Kelly, however, never lacked love or encouragement. A withdrawn youth, she blossomed in her teenage years. Kelly has developed an unquenchable love for education and learning, immersing herself in Dostoevskii, contemplating works from Russell and Plato to Marx and Machiavelli.

A straight A student, Kelly has made the best of her sub-standard high school. Her academic achievements include a 5 on the AP Composition test, a 4 on the U.S. History test and being a National Achievement Finalist. Kelly is also National Honor Society Historian, Band Council Vice President (playing the bass clarinet and tuba), Science Club Secretary, Senior Class Representative, a member of Students Opposed to Drugs/Alcohol, a Social Studies tutor, a mentor to underclassmen, and a prolific member of her school’s Human Rights Alliance.

Kelly is committed to promoting equality in her community. As a member of the Lane County Human Rights Advisory Committee, she works with local leaders to fight injustice. A columnist for the city paper in the 20Below section, her articles about racism have instigated the greatest reader response since the creation of 20Below. Kelly has been designated a Hometown Hero for work in human rights, and the Outstanding Afro-American student in Lane County. She is currently involved in a campaign to compel the city of Springfield to adopt the Universal Declaration of Human Rights.

Kelly is also an accomplished, though modest, artist. She has done artwork for community groups, including the NAACP. She has also been involved with the ACT-SO program for four years, winning gold medals in the category of painting at the 2001 and 2002 national competitions.

Above all, Kelly feels it is her purpose to help others through education and service. She has often said that, because she is a human being, it is her duty and privilege to help other human beings. She believes in the “single garment of destiny” that Dr. King spoke of, and feels that love, not violence, will bring peace and prosperity to the human family. Her love for man and her appreciation for education has led Kelly to desire a career in education. She longs to teach Art and Humanities, in underprivileged areas, at the high school level where students need the greatest amount of guidance and encouragement. She doesn’t want to push facts; she wants to equip students with the tools for rational thought.

Kelly can’t envision herself as a leader of men. Rather, she longs to help people reach a level at which they can lead themselves. Kelly strives to serve people – the black, white and everyone in between – because she hopes that humanity’s collective past will not become its children’s future.