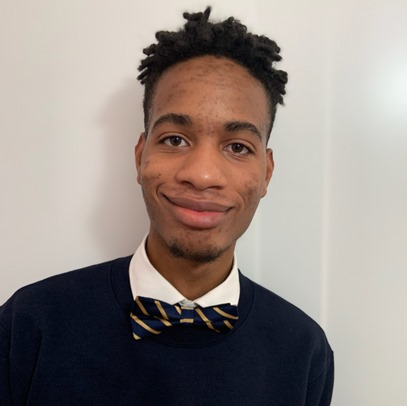 Kristopher Wallen was born to immigrant parents in Miami, Florida, before moving to Coral Springs at a young age. From the start, he had a deep curiosity for pushing the bounds of knowledge, always questioning claims and making arguments, and was taught the importance of determination and perseverance from his single mother. His experiences growing up made him deftly aware of lapses in success by lower socioeconomic classes in American society, especially in education, guiding his future motivations.

Academically, Kristopher maintains his placement as second in his class of near 600 students and has a perfect score on the SAT reading section. His research paper on the role personal income plays in the racial achievement gap earned him his AP Capstone Diploma. He’s been named an AP Scholar with distinction, is on track to receive his Cambridge Diploma, and is a Questbridge National College Match recipient as well as a Posse finalist.

Kristopher is just as involved with his extracurricular activities. Kristopher is his school Key Club’s Vice President, where he directs efforts to give back to his local community, as well as to get his peers involved in these efforts, have won him district and state-level awards. He’s also a member of Mu Alpha Theta, or math honor society, as well as his School Advisory Council, all while holding a job at a local store to support his family and his endeavors.

The activity most important to Kris is his extensive engagement in Speech and Debate, in which he honed his affinity for argumentation as a Lincoln-Douglas debater. In high school, his awareness of the corrupting aspect of disparate school funds in the competitive scene didn’t let him stop his debate success, as Kristopher worked hard to overcome financial burdens, earning a scholarship in his Sophomore year to attend a debate camp for free. In his senior year, he became the first debater in school history to break to elimination rounds at a National bid tournament, the following weekend he did so for the second time. Over his four-year Debate career, he’s amassed multiple tournament placements, but he’s most proud of his team’s success – both in and outside of the debate round. Kris set up a debate tutoring system with his feeder middle school, as well as becoming a mentor and teacher for the rest of his previously struggling debate team as he helps them overcome the same financial burdens he encountered. He recognizes debate as a way for students to become informed citizens of the world, to build presentation and critical thinking skills that are key to generating meaningful change later in life, and is glad his efforts have improved debate’s accessibility.

Kristopher will pursue a double major in Political Science and History at Emory University, where he plans to continue his debate career. After college, he intends to pursue a career in either law or public policy, aiming to effect positive change through reform to the criminal justice system.