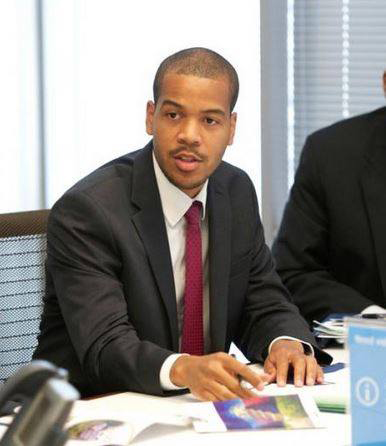 Ambitious, meticulous, inquisitive, knowledgeable, creative, diligent and dependable, Macarrin Morton is an outstanding student leader and scholar at King/Drew Magnet High School of Medicine and Science in Los Angeles, CA. He is co-valedictorian of his class of 315 seniors, and he holds several leadership positions within his school, serving as President of the Class of 2003, Copy Editor and Sports Editor of the yearbook staff, editor of King/Drew’s College News, Treasurer of the California Scholarship Federation, and a student representative on his school’s Accreditation Team and Site Management Council. While balancing academics and extracurricular activities is extremely challenging for Macarrin, his drive to succeed sustains him. “Although a product of the inner city, Macarrin has not allowed his disadvantaged environment deter his scholastic and personal goals,” comments college advisor Lisa Golden.

Involved in his community’s affairs, Macarrin volunteers a significant portion of his time at his local YMCA, where he tutors and mentors elementary school students from the South Central Los Angeles area. He has volunteered at the YMCA for three years, accumulating over 2000 hours of service, but more importantly, establishing positive relationships with youth who have considerable potential for success.

Macarrin remains humble about his academic résumé; however, it deserves mention. He is a Future Leader of Los Angeles, a National Council of Teachers of English Achievement Award Winner, an AP Scholar, a Kodak Young Leaders Award Winner, a Ronald McDonald Future Achievers Scholar, a three-time recipient of a Governor Gray Davis scholarship for his performance on state-wide standardized tests, and a recipient of a United States Achievement Academy National Mathematics Award. He is listed in the 2002 Who’s Who Among American High School Students yearbook, was named “Best Speaker” at the Junior Statesmen Symposium on Leadership and Los Angeles Politics, and was his school’s “Top Scoring Student” on the American Chemical Society’s Olympiad Test.

Macarrin attributes his triumphs to God’s grace, watching over him and ensuring that his dreams, despite much adversity, materialize. He is aware of the significant contributions others have made to his young life. Although undecided about which career path he wants to venture down, Macarrin knows that whatever he decides to do with his life will have positive effects on tomorrow’s society.