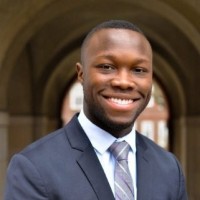 Michael Christopher Reid was born and raised in Dolton, a south suburb of Chicago. His parents, Vincent and Marcia Reid, are two immigrants from Jamaica who traveled to America to pursue the “American Dream.” Since his birth, Michael’s parents have taught him the value of education and of taking advantage of every opportunity presented to him. This supportive structure led Michael to avoid the lure of destructive decisions presented to him by his neighborhood.

In an attempt to pursue a better future for himself, Michael decided against attending his neighborhood public school. Instead, he opted for one of the private schools that Chicago has to offer. To raise the money needed for tuition at a private school, Michael applied for many scholarships and received a scholarship from LINK Unlimited Scholars, Chicago’s premier college readiness and mentorship program. After receiving help from LINK Unlimited Scholars, Michael attended Saint Elizabeth Seton Academy where he played basketball, became involved in the student government, and was a member of the art club.

Following his freshman year, Michael decided to transfer from Seton Academy to Mount Carmel High School to further academically challenge himself. A year after transferring to Mount Carmel High School, Michael was able to make a large impact upon the school. By the end of his junior year, Michael became President of the student body, President of the Student Government, Treasurer of the Multi-Cultural Club, member of the Mock Trial team, editor and actor for Mount Carmel’s video broadcasting group, and member of the Invisible Children’s Club. Along with being active in these clubs, he was also able to graduate with a 4.33 GPA from Mount Carmel.

Michael’s involvement does not stop when he leaves school. After recognizing the blessings he received throughout his life, Michael decided to give back to different neighborhoods in the south side of Chicago. For four years, Michael worked as a volunteer basketball teacher for the Dolton Park District. He also has used his influence as the President of LINK Unlimited Scholar’s Student Leadership Group to organize toy drives which provided toys to hundreds of children during Christmas seasons.

In the future, Michael plans to work in the field of private equity. In preparation for this goal, he has gained different experiences with business. During his sophomore year, Michael created a clothing line, SubMerged Reality Clothing, which sold apparel to customers across the nation. During his junior year, he worked as an intern for Muller & Monroe Asset Management, a private equity firm located in downtown Chicago. He also worked as intern for the Menu Management and Innovations department for the McDonald’s corporate office in Oak Brook, Illinois. To become even better prepared for a career in private equity, Michael plans to major in Economics in college.