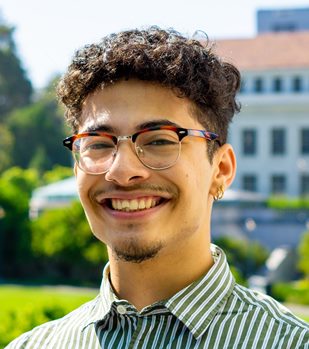 Miguel Anderson is a high school senior attending Summit K2 in El Cerrito, California. Although he was born in Berkeley, California, he was raised in Richmond, California. Due to this, he is unapologetically Richmond. He was raised in a single-parent household with his mother, Cynthia Anderson, and twin sister Cambria Anderson. In his spare time, he enjoys listening to music, DJing, and thrifting. You can find him at a record store, concert, or out exploring the city. With an unparalleled passion for life, he loves creating memories with those close to him.

Growing up in Richmond has exposed Miguel to a lot. From a young age, Miguel has constantly witnessed how institutional barriers such as poverty and racism disrupt society and displaces communities. Being queer, multiethnic, and from poverty, Miguel has personally been displaced and this leads Miguel to believe that everyone has a place in this world, no matter where they come from.

Miguel pursues this belief at school, where he is a prominent advocate for equity and inclusion. He is the Senior Class President for Summit K2’s senior class as a part of the Associated Student Body. At this level, he advocates for student needs such as in AP Calculus, where he has transformed free periods into math review sessions to offer extra support in math subjects to students who need it. He also brings his interest in music to the school community. Miguel is the founder of Musicality 101, a student organization that aims to spread awareness and provide education through music. He teaches DJ lessons and hosts musical discussions in class. However, Musicality 101’s greatest impact lies outside of the classroom, where the organization has hosted successful campaigns that educate audiences about current social injustices through benefit concerts. Musicality has raised $700 for the humanitarian crisis in Yemen, and provided musical entertainment to non-profit organizations for their social justice campaigns.

Miguel’s advocacy continues into his journalism. He believes journalism is a way to communicate important news and expose society’s injustices. Take a look into his work and you’ll see: Miguel has created a radio feature about creative expression in minority communities and it’s repercussions for minority youth and a radio commentary about his personal experience with gentrification. Now, Miguel uses journalism to implement a new narrative for marginalized and minority communities across the globe. He owns the blog, Stageconfessions.com, where he writes to provide a platform for underrepresented minorities in the music industry. He has written articles on “Black Artists Who’ve Revolutionized Music,” interviewed the Mexican-American singer Katzu Oso, and spotlighted transgender artist SOPHIE’s artistry. With these articles, Miguel hopes to communicate to communities worldwide that minorities are able to reach triumphant heights. Minorities are more than just stereotypes, they are innovators and achievers. Miguel hopes to show that to the world by pursuing a dual-degree in journalism and sociology.

Now, wherever Miguel goes, he is confident to make an impact.