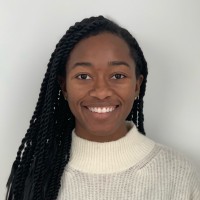 Morgan Brewton−Johnson lives her life on the border between two worlds: reality and her own fantasies. Her boundless imagination is constantly creating, exploring, and losing itself, and nothing is too strange or too fantastic. Morgan holds the beauty of the mind and of human creativity in high regard, and has developed a strong artistic inclination, which manifests itself in her interests in photography and contemporary art. Morgan believes that the value of art lies beyond superficial aesthetics, and rather is in the power of art to distort perspectives and shift the lens through which we view the world.

Morgan’s propensity for the artistic stems from her long−standing love of literature. Having been read to since birth, Morgan credits her single mother, Zonya Brewton, with igniting her passion for all things literary. Throughout her childhood, Morgan was an incorrigible “sneaky reader,” attempting to read through the glass table during dinner or under her covers by book light at night. It was then that Morgan realized that she could, almost literally, live a thousand lives through books, and it became her goal very early on to experience as much as possible, even if only through the eyes of a fictional character.

Growing up in a household with two strong women, her mother and her aunt, Jackie Brewton, Morgan was empowered from an early age to marry her natural sense of curiosity with her eagerness to pursue knowledge. Both women fostered Morgan as she progressed through school and became more involved in activities that fused her natural creativity and her determination to make a positive impact on her community. For example, as founder of her school’s Yoga for Kiva club, she has organized on−campus yoga classes that provide a meditative outlet for her school’s student body while simultaneously fundraising for the club’s involvement in the micro-investment organization, Kiva. While Morgan is very proud of her academic and extracurricular involvements, she feels that her greatest strengths cannot be listed on paper or categorized under awards or honors. Above all else, Morgan feels that her value lies in her commitment to improving the world around her.

Morgan came to this realization while in India with her school’s photography department. In the midst of safaris and palace tours, she focused her lens instead on the debilitating poverty of the cities, on the social gender inequality, and on the dangers of an ineffective bureaucracy. It was there that Morgan recognized the transformative property of art, and its power to act as an agent for social and political change.

Morgan hopes to use this knowledge to make a positive impact on a global scale, and has been particularly inspired by the work of photojournalist Alison Wright. She plans to study anthropology in college and hopes to pursue a career that allows her to merge her passions for art, travel, and public service.