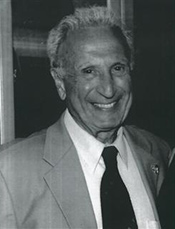 Norman R. Rales was born on July 19, 1923 in New York City. At the age of seven, his mother died in childbirth with his younger sister. His father, unable to find steady work during the Great Depression, placed Norman and several of his siblings in the Hebrew Orphan Asylum, where he remained until graduating high school at the age of 17.

For the next 8 years, Norman worked odd jobs all over the country including the shipyard in California during WWII after being rejected by the service due to a health issue.

At the age of 25, Norman married his wife of 54 years, Ruth (deceased 2004) and they settled in Ruth’s hometown of Pittsburgh, PA. Soon after, Norman began and long and distinguished career in the home improvement industry, starting as a salesman and then founded his own company Canyon Stone. He subsequently opened offices throughout the Mid-Atlantic Region including in Alexandria, VA, Richmond, VA and Charlotte, NC.

Foreseeing the tremendous growth potential of the Washington DC area, Norman moved his wife and four sons to Bethesda, MD in 1965 while founding Mid-South Building Supply Company, a distribution of build products to home builders and the home improvement industry.

Over the next 25 years, Norman built Mid-South into a regional powerhouse and ultimately sold the company to his employees, the first such ESOP (employee stock ownership program) transaction in the Country.

Not resting on his laurels, Norman entered into land development and time sharing businesses and enjoyed great success. In the case of the latter, Norman would correctly predict that this nascent industry would ultimately be led by the like of Marriott and Hilton hotels. During this time, Norman also bought and sold a local bank called the Kennedy Bank and Trust .

Never forgetting where he came from, Norman was determined to share his success with others not as fortunate. Toward that end, he established with his wife the Norman and Ruth Rales Charity Foundation. Funds from this foundation helped to establish the Ruth Rales Jewish Family Service, a non-sectarian Social service primarily renowned in Palm Beach County, Florida. The Norman and Ruth Foundation has also supported numerous hospitals, cancer research, education for the disadvantaged and built over half a dozen group homes.

Norman has also worked hard to mentor aspiring entrepreneurs throughout his career, including one individual who he helped to establish the most successful minority owned auto dealership in the nation.