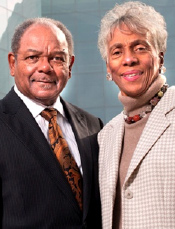 Eddie is founder and President of Brown Capital Management in Baltimore, one of the country’s oldest African-American owned investment management firms.  He has 40 years of investment experience having served as Vice President and portfolio manager for 10 years at T. Rowe Price Associates immediately prior to starting his own firm in 1983.

Eddie serves as a member of the board of director of Open Society Institute (OSI)-Baltimore.

In 1998, the  U.S. Secretary of Labor appointed Eddie to the ERISA Advisory Council for a three-year term, in 1999 the Governor of Maryland appointed him to the Maryland Economic Development Commission and in 2002, the Mayor of Baltimore appointed him to the  Board of the East Baltimore Development Corporation.  This urban redevelopment project, in conjunction with The Johns Hopkins University, the City of Baltimore, and the State of Maryland, is the largest housing, commercial and life sciences initiative in the history of Baltimore.

In 1994 Eddie was recognized as a Distinguished Alum by the Kelly School of Business, Indiana University.  In 2003, Eddies was selected Ernst & Young’s Entrepreneur of the Year in the financial services category for the state of Maryland.  In April 2003, hi was inducted into the Maryland Chamber of Commerce Business Hall of Fame.  In 2006, he was awarded by Maryland Life Magazine the Marylander of Distinction Award and in 2010 selected by Sellinger School of Business, Loyola University as Business Leader of the Year.

Sylvia’s career pattern has been divided between education and business.  She taught middle school in Red Bank, New Jersey and Hyde Park, New York.  Locally, she taught at Baltimore City Community College and for five years served as the Assistant Director of Admissions and Registration.  On the business side, she worked for thirteen years in property development and management for the family’s real estate in Baltimore City.

In 2002 Sylvia and Eddie received the Philanthropists of the Year Award by the Maryland Chapter of the Association of Fundraising Professionals (AFP), and also each received the Distinguished Alumni award from Howard University.  In 2005, they received the Arthritis Foundation’s Lifetime Achievement Award.

In2002, their family announced the creation of the Turning the Corner Achievement Program (TCAP), an unprecedented education initiative for African-American middle school students in Baltimore.  Managed jointly by Associated Black Charities and the Baltimore Community Foundation, TCAO provides Baltimore’s middle school youth with a unique combination of education and personal support to prepare them for success in high school and beyond.

Sylvia is a native of King William Virginia.  She earned a Bachelor of Science Degree in Health and Physical Education from Howard University, and a Master of Science Degree in Health Education from Indiana University.  Eddies is a native of Apopka, Florida.  He earned a B.S. in Electrical Engineering from Howard University, a M.S. in Electrical Engineering from New York University and an M.B.A. from the Kelly School of Business, Indiana University.  He also has two professional designations:  Chartered Financial Analyst (CFA) and Chartered Investment Counselor (CIC).

In May 2011, Beating the Odds:  Eddie Brown’s Investing and Life Strategies, a book about Eddie’s journey thus far, both personal and business, will be published by John Wiley & Sons.