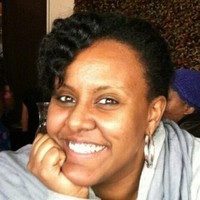 While she was born in Grand Rapids, MI, Naomi Biedemariam Andebrhan spent the first half of her life half a world away in Eritrea and Saudi Arabia. Immigrating to the United States at the age of nine was the beginning of a series of profound changes in her life that culminate into who she is today. Shaped by family hardship, a strong mother and cultural values, her desire to not only overcome obstacles but to thrive and succeed despite them began at an early age.

Attending the highly selective and academic Whitney High School since the 7th grade, she has found her way into numerous school and community activities. A natural leader, Naomi has a strong persona at her school that has come about through years of hard work as Freshman Class Treasurer, Prom Assembly Head, Senator – Chair of Student Forums and Class Commissioner of Spirit. A very competitive member in the Model UN program, she also serves as Director of Activities, where she organizes conferences for underclassmen and arranges the program banquet and special presentations.

Of all her leadership positions, however, she is most proud of founding MenTu, a club initiated to serve lower achieving students in her community, and becoming Black History Month Coordinator, leading celebrations unprecedented in her high school. By inspiring others to outreach and educating her schoolmates about the black minority in their community, Naomi has left behind a small legacy. In both of these programs, she has raised expectations that others will strive to fulfill.

Community service is very important to Naomi, because she feels that it is crucial to “return the blessings that you have received.” She has volunteered at Long Beach Memorial Hospital, Rose Parade decorating and through the International Peace Choir. Singing is one of her many talents, one that she has exhibited not only in serving her community but in school talent shows and musicals as well. As a three-year Junior Counselor at Camp Paivika, a camp for high school students with mild to severe mental and physical disabilities, Naomi learned a great deal about compassion and humanity, a lesson, that along with her love of biology inspired her to become a doctor and then to serve the need that exists in Eritrea.

Naomi has also been successful academically. In the top 5% of her class, she has been recognized as a Coca Cola Scholar, Quest Scholar, National Achievement Winner, ABCUSD Distinguished Scholar, Governors Scholar, AP Scholar with Honors, GSE Honors in Biology, and also received school Wildcat Awards for Character, and English. She was voted Most Inspiring by her peers, and recently received the honors of Ms. WHS, and Ms.Talented in a district wide competition.

Motivated by her potential to contribute, her family legacy and a strong desire to learn, Naomi believes, “If you have the ability to do great things, to accomplish anything less is a waste of your opportunity.” She currently works as an Associate with Gift in Kind, Resource Integration, AmeriCares.