Philanthropist and entrepreneur Robert F. Smith is the Founder, Chairman and CEO of Vista Equity Partners (Vista). As Vista’s Chairman and CEO, Smith directs Vista’s investment strategy and decisions, firm governance and investor relations. Under Smith’s leadership for more than two decades, Vista has exclusively focused on enterprise software companies, data and technology-enabled businesses. Vista is based in Austin, Texas. 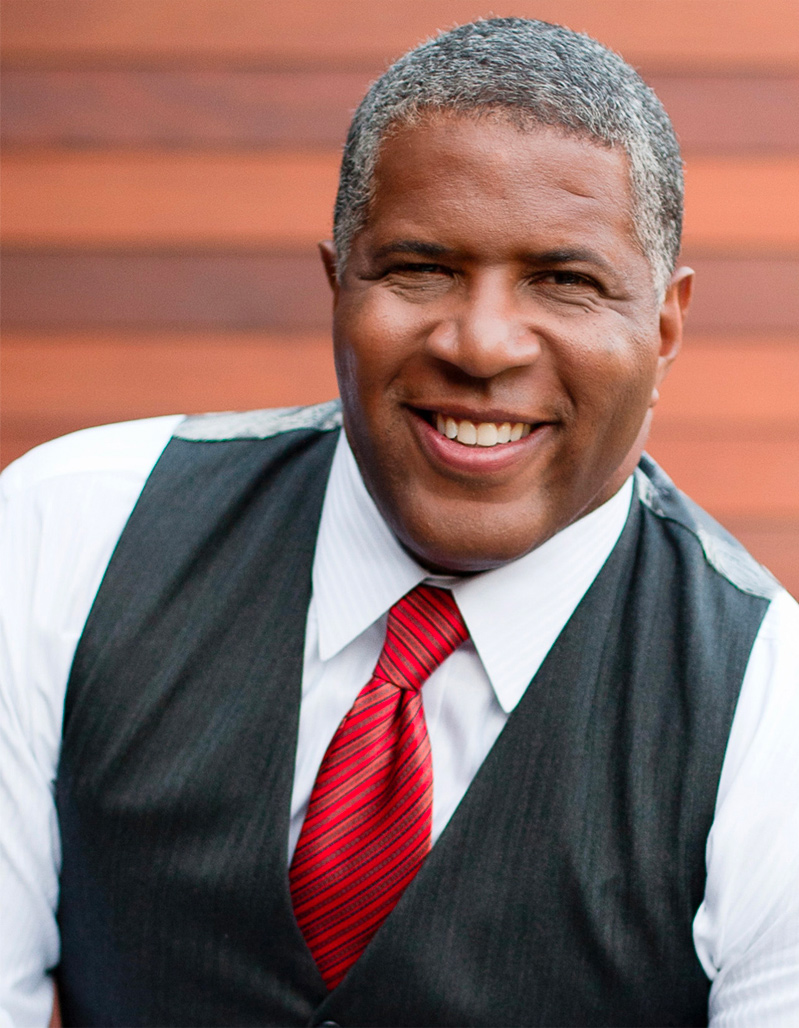 Smith’s receipt of the Ronald H. Brown American Journey Award in 2017 is based on his many charitable efforts. In particular, Smith has long been committed to the community and helping others fulfill their own potential, and his global view and tireless efforts to improve the lives of others led to his selection for the award. He learned these values from his parents, who were both educators, such as when he saw his mother send a monthly check to the United Negro College Fund every month, regardless of how much money the family had.

As the founding director and President of Fund II Foundation, Smith led efforts to provide the UNCF with the largest-ever investment in STEM education for African Americans, giving thousands of young people the opportunity to develop skills that will help them prepare for future jobs. Fund II Foundation also provided $20 million to fund Cornell University’s engineering program, which Smith matched with $20 million of his own money and added another $10 million for a Tech Scholars program to benefit African Americans and women who pursue tech- and science-related degrees.  In 2022, Smith added another $15 million for STEM scholarships. Other organizations supported by the Foundation include the National Park Foundation, the Susan G. Komen Foundation, internXL, and NPower.

As a board member of Robert F. Kennedy Human Rights, Smith has focused efforts on the criminal justice system in the United States, especially issues related to mass incarceration. He is also a Founding Partner of the REFORM Alliance and serves as Chairman of Carnegie Hall, and as a Member of the Executive Committee of the Business Roundtable. He is also a member of boards tied to both of his alma maters, the Cornell Engineering College Council and the Board of Overseers of Columbia Business School.

In 2016, Smith contributed $20 million to the National Museum of African American History and Culture, a part of the Smithsonian Institute. It was, at the time, the largest gift ever given by an individual to the institution. His contribution supports a fellowship and internship program, the digitization of African American photographs and audiovisual media, and the Robert Frederick Smith Explore Your Family History Center, which allows people to interactively research their genealogy.

In 2017, Smith was the first African American to sign the Giving Pledge, dedicated to donating half of his net worth during his lifetime.

At the 2019 Morehouse College graduation ceremony, Smith revealed during his commencement speech that his family foundation would pay off the student loan debt of the entire class of Morehouse graduates that year. The total gift amounted to $34 million, including payment of funds borrowed by parents for their graduates’ educations, and it helped establish the historically Black college’s Student Success Program. Previously, Smith gave money to fund scholarships and an outdoor study area at Morehouse. Following his Morehouse gift, Smith envisioned an organization that could help relieve the burden of college debt on young people. Smith’s vision became Student Freedom Initiative, a nonprofit that focuses on providing support resources and affordable access to college education to students attending minority serving institutions (MSIs) and Historically Black Colleges and Universities (HBCUs). Smith currently acts as Chairman of Student Freedom Initiative and jump started the program with a personal donation of $50 million, matching the amount donated by Fund II Foundation.

In addition to the Ronald H. Brown American Journey Award, Smith has been recognized for his philanthropic service with many other accolades. In 2019, he received both the Carnegie Medal of Philanthropy and the UNCF’s President’s Award. A year before that, he was the recipient of the International Medical Corps’ Humanitarian of the Year Award and the Morehouse Candle Award in Business and Philanthropy. Prior to those, he received the Congressional Black Caucus Foundation Chair’s Award, the Ebony John H. Johnson Award, the Humanitarian of the Year Award from the Robert Toigo Foundation, and the Ripple of Hope Award from Robert F. Kennedy Human Rights, among others.

Smith’s career in finance began at Goldman Sachs where he worked from 1994 – 2000 in New York and Silicon Valley. As Co-Head of Enterprise Systems and Storage, he directed over $50 billion of merger and acquisition activity with companies like Apple, Texas Instruments and Yahoo. Smith was the first person at Goldman to focus on transactions in the software and technology sector, and he moved to San Francisco in 1997 to pioneer those efforts.

Smith earned a B.S. in Chemical Engineering from Cornell University. After graduation, he worked as a chemical engineer for both Goodyear Tire and Rubber in Buffalo, New York, and Kraft General Foods. At the latter company, Smith helped develop a new coffee filtration and brewing system, for which he was assigned two U.S. patents and two European patents. During this time, Smith also went on to receive his MBA from Columbia Business School, where he was chosen to give his class’s commencement address.

As a business leader, entrepreneur and investment banking expert, Smith’s insight and achievements have been lauded by many individuals, groups and publications. Forbes identified him as one of the 100 Greatest Living Business Minds in 2017. That same year, Smith became an inductee to the Texas Business Hall of Fame. He has also received the Award of Excellence from the National Association of Investment Companies, the Cornell Engineering Distinguished Alumni Award and the Columbia University BBSA Distinguished Alumni Award.

Connect with Robert F. Smith on social media for the latest updates on his philanthropy and Vista Equity Partners: