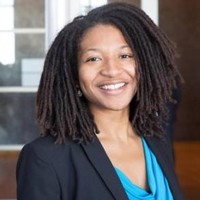 Njeri Kamilah Grevious is an academically and musically accomplished high school senior with special strengths in mathematics, violin/viola performance and music theory. She is kindhearted and cares about reaching out to others. Her name – Njeri – is Kikuyu for “daughter of a warrior”: fitting for a young lady whose strength has carried her through several difficult moves as well as unfortunate financial and family traumas.

She has persevered and enjoyed a rigorous, honors high school curriculum, including eleven undergraduate classes. She also earned a national Johns Hopkins CTY Distinction in Mathematics. Njeri began excelling in math at the kitchen table at a very young age. Yet at school in the 5th grade, she was denied the opportunity to advance a grade even though a child who did not look like her was promoted. Since then, Njeri has studied multivariable calculus, statistics and linear algebra and has been determined to one day create a touring chamber ensemble to fund mathematics education for children of color in the United States, Africa and other regions.

Njeri began her musical studies at four years old on piano, winning 1st place in a statewide competition at eight years old. Piano lessons soon became unaffordable, but her love for music continued to blossom. Njeri has consistently earned high honors at the NEC Preparatory School though Project STEP, a string training scholarship program for African-American and Latino students. In addition to successfully balancing life in a single-parent household, academic commitments and artistic interests, Njeri has also dedicated herself to more than 250 volunteer hours since elementary school. She has loved tutoring students in music theory and performing chamber music for underserved audiences at nursing homes and youth events. She also has performed in numerous benefit concerts to raise money to help other young musicians.

Njeri is thrilled to have been among a group of NEC prep students selected to perform with Yo-Yo Ma during Gov. Deval Patrick’s inauguration celebration, an outreach soloist with Boston’s Landmarks Orchestra and a performer with members of the Youth Orchestra of the Americas at a Harvard University symposium. She has also performed with acclaimed oboist Peggy Pearson of Winsor Music, Tanglewood’s Young Artists Orchestra, and with her brother and sister in the Mahewa Family String Trio. She is a member of the Boston Philharmonic Youth Orchestra, a thriving new orchestra conducted by Maestro Benjamin Zander. In 2012, Njeri was named future director of the Winsor Music nonprofit, a scholarship and outreach program for promising, underrepresented classical musicians.

Njeri has taken her interests into the science lab, inspired by her great-grandmother’s facility at recalling hymns despite few other memories. She has been researching the impact certain techniques of musical ear training on brainstem plasticity. Njeri looks forward studying languages, applied mathematics and neuroscience in college.

Njeri credits her mother for holding on after her parents divorced and her father moved away. She cherishes her mother’s unwavering efforts to help her children focus on the positive and strive for excellence. Njeri is extremely grateful to family and friends who have provided shelter, kindness and encouragement and who have paved the way for her and her family.