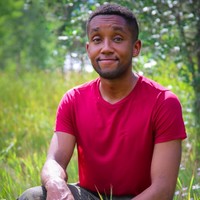 Robert Poole is more than his hair.

Clean cut, professional, and short – yes, but he is a fun-filled toy box of possibilities. He is not his height, eye color, shoe size, or favorite Starbucks drink. Although there are commonalities between him and a Caramel-Frappuccino with an extra shot of espresso and two Splendas, they do not define him. Neither does the color of his skin.

In Robert’s four years at Kentridge High School, he has truly been the renaissance kid. Always willing to try new things, his talents have shined through a variety of venues. He has been in ten plays as a part of Kentridge Drama, is a dedicated four-year member of the Pep Band and of the Jazz Choir which meets every day at 6:30 A.M. Leadership is a role that Robert embraces: he has been at the forefront, leading and enabling his peers to lead themselves. He is co-president of the Choir program, a Drum Major and percussion section leader, tutors musicians at Glenridge Elementary, assistant directs drama at Northwood Middle, and will play Richie Cunningham in Kentridge’s production of Happy Days – The Musical.

Robert’s other extra-curricular activities include being DECA senior rep and two time state finalist, an officer in the school district’s Alliance for Diversity and Equity, four-year student government officer, and president of the Black Male Leadership Group. He’s a student-of-the-month, a Valedictorian, an AP Scholar, National Achievement Finalist, and one of the first black students to enroll in second-year calculus in his school’s history. Although this doesn’t leave much time for sleep, he considers himself blessed to have achieved such accomplishments. With these achievements and Robert’s passion for life, he not only represents himself in a positive light, but breaks down the stereotypical walls and misconceptions to which many of his peers hold on. He doesn’t need to lead through words — his actions and reputation speak for him.

Robert plans to major in mechanical engineering in hopes of becoming an Imagineer for Disney, and the performing arts will continue to play a large part of his life. Robert’s future is open, and he is open to it. It is through his friends, family, and faith that he has felt supported in his efforts and successes.

Robert is a teenager. A guy. A person trying to do right by others and make each day special. A brother, a son, a confidante, a teacher, a student, a piece of this great existence called life. Whether he is red, or green and blue –his favorite colors – or purple mountain majesty – his favorite crayon – he is first and foremost Robert Lee Poole, III, who proudly lets his achievements stand alone without any additional attached phrases on the end: for a new kid, for a short kid, for a black kid.