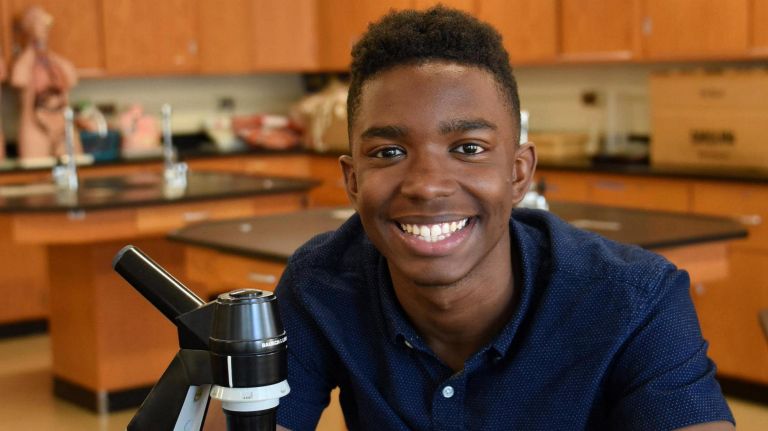 Michael Lawes will go to any length to pursue his love of science — even if that length involves a four-hour round-trip daily commute for two full summers.

Lawes, 18, who got involved in his school’s science research program as an eighth-grader, has since had a review published in the science journal Toxicology and Applied Pharmacology and was a contributing author to an article that appeared last year in the journal NeuroToxicology. The latter research found that protein-sugar molecules targeted specific neurons — including dopamine, glutamate and acetylcholine — under high-glucose conditions in the neurodegeneration process.

The science-loving Lawes, a senior at Elmont Memorial High School, conducted his research, which has implications for those with diabetes and Parkinson’s and Alzheimer’s diseases, at the Bronx-based Albert Einstein College of Medicine during the summers of 2017 and 2018. To get there, he took the F subway line at about 6 a.m. each morning from Jamaica, Queens, to Manhattan then transferred to the 5 subway line to reach the prestigious medical school.

“The hardest part was not falling asleep,” he said. Of the research itself, he said: “My grandfather and one of my good friends are both diabetic, so I wanted to raise awareness and get some more insight into the implications of advanced glycation end products.”

In addition, he is ranked fourth in his class, is an AP Scholar with Distinction, and is on the National, Art, Science and Tri-M Music honor societies. He also co-founded his school’s Apple Tech Group and has been a member of his school’s chorus, Mathletes team, Model UN, Key Club, Superintendent Student Advisory Council, and the mentoring group Men of Elmont.

As a Key Club member, he has participated in a variety of volunteer efforts — including wellness walks to raise funds for scholarships and blood drives to benefit the New York Blood Center.

“My favorite thing about Michael is how he has consistently given back to his Elmont community,” Elmont science teacher Michelle Flannory said. “He tutors many students in math during his ‘free’ time, and helps our younger researchers learn to take care of their experimental organisms. His selfless contributions have helped ensure that upcoming Elmont students can experience even greater success.”

Of all his achievements, Lawes said he remains most proud of having his research published in a peer-reviewed science journal.

“To contribute something significant enough to be published feels amazing,” he said.

HIGHER ED: Lawes will major in computer science at Columbia University. He received a full four-year scholarship to the university through QuestBridge National College Match, which connects high-achieving, low-income students with scholarships to top colleges.

FRESHMAN YEAR: “I want to make sure I meet as many people as possible and experience as many things as possible.”