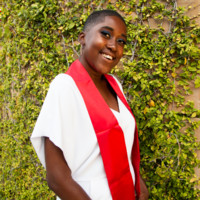 A “sojourner” is a visitor, one who travels and resides temporarily in a given place. When Sojourner Ahebee was born in Cote d’Ivoire, West Africa, to an American mother and an Ivoirien father, she carried the history that her name possessed. After the first seven years of her life, and the subsequent death of her father, she, along with her family, would return to her mother’s original hometown of Philadelphia, leaving behind the Ivoirien Civil War, her beloved coconut tree, the taste of fried plantain on the tongue, and the only home she knew.

Upon her move to Philadelphia, Sojourner was struck by her new American classmates and their distorted perceptions concerning the continent of Africa. Sojourner remembers recounting to her new friends stories about Cote d’Ivoire. She told them of the seasons, and spoke of the flower plantations in Bingerville, but her classmates only laughed, bombarding her with questions like, “Did you live in a hut?” and “Did animals roam around the city?”

But Sojourner’s first American classroom experience was not an empty one. The questions posed by her classmates pushed her to consider her identity, and her history as a girl with two homes. The daughter of a poet, Sojourner began to write her first poems at the age of eight as a means of exploring these questions of identity, and that overwhelming feeling of having to walk between two worlds.

During Sojourner’s sophomore year of high school, she left Philadelphia to attend Interlochen Arts Academy, an arts boarding school in northern Michigan. For the past three years Sojourner has been studying creative writing, as well as maintaining a rigorous academic load. She has served as the editor of her school newspaper, the President of Interlochen’s chapter of Amnesty International, is currently the Vice President of her entire student body, as well as a co-editor-in-chief of Interlochen Arts Academy’s annual creative writing anthology, The Interlochen Review.

Aside from Sojourner’s school responsibilities, she has managed to garner many art-related awards as well. Sojourner’s poetry has been published in numerous literary magazines. She is a recipient of two gold medals from the Scholastic Art and Writing Awards for her poetry, and in April of 2013 her 10-minute play entitled “Sparrows” won the Young Playwrights Festival in Traverse City, affording Sojourner a full production of her play.

This year, Sojourner will serve as one of five National Student Poets, the nation’s highest honor for youth poets presenting original work. In September of 2013 Sojourner, as well as the four other student-poets, was received in the White House by Michelle Obama to garner her award. For a year, Sojourner and her fellow poets are taking on community service projects in which they interact with specific communities via poetry workshops. Sojourner has conducted several workshops with Alzheimer’s patients at a local nursing home, pushing the patients to consider the role that language and memory plays in their daily lives.

Sojourner Truth, an African-American abolitionist, as well as Sojourner Ahebee’s very own namesake, once said, “Truth is powerful and it prevails.” Through the power of language, Sojourner Ahebee aims at uncovering truth, uncovering narrative, and discovering the unlearned territory of the human heart.