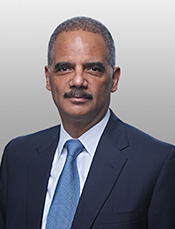 Eric H. Holder, Jr. was born in New York City and attended public schools there, graduating from Stuyvesant High School, before earning a B.A. in American History from Columbia College in 1973 and a J.D. from Columbia Law School in 1976.

In July 2001, Mr. Holder joined the Washington, D.C. law firm of Covington & Burling as a partner in the firm’s litigation practice group, where he represented clients in complex civil and criminal cases as well as internal corporate investigations.

While Attorney General, Mr. Holder oversaw the government’s efforts to address many critically important issues arising at the intersection of law and public policy, including national security investigations and prosecutions; landmark antitrust, environmental, fraud and tax cases; the defense of voting rights and marriage equality; and reform of the federal criminal justice system. In 2014, Time magazine named Mr. Holder to its list of 100 Most Influential People, stating that he “worked tirelessly to ensure equal justice”.

After his departure from the Department of Justice, Mr. Holder returned to Covington & Burling and is resident in their Washington office. He focuses on complex litigation and investigatory matters that are international in scope and raise significant enforcement issues and substantial reputational concerns.

Mr. Holder’s many civic commitments have included service on the boards of Columbia University, the National Center for Victims of Crime, the Meyer Foundation, and the Save the Children Foundation, among many others.  He also served on the U.S. Sentencing Commission Ad Hoc Advisory Group.Mr. Holder has received numerous awards and honorary degrees in recognition of his professional and civic contributions, including the NAACP Chairman’s Award, the Department of Justice’s John F. Keeney Award, the District of Columbia Bar Association’s Beatrice Rosenberg Award, George Washington University’s Martin Luther King, Jr. Medal for Outstanding Service in Human Rights and The Lawyers Committee for Civil Rights Robert F. Kennedy Justice Prize.  The District of Columbia Bar Association has recognized Mr. Holder as its Lawyer of the Year and Legal Times named him, in 2008, as one of “The Greatest Washington Lawyers of the Past Thirty Years”.