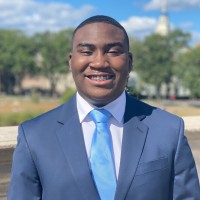 Travis Johnson was born on November 19, 2001 and has lived in Lynchburg, South Carolina his entire life. The youngest of five children, Travis grew up in an economically challenged area and personally witnessed the detrimental effects of a flawed criminal justice system within his community. In return, Travis developed a keen interest in seeking social and economic justice and equality through politics, business and law. Despite not coming from an affluent area, Travis fundamentally believes that the values of faith, hard work, dedication and persistence create the recipe for success in life. Travis works diligently to maintain a perfect 4.0 GPA. Not only does he strive for success, but Travis works to ensure that other individuals with similar life circumstances are able to rise above any obstacles.

After watching the results of the 2008 Presidential Election, Travis was inspired and developed an interest in politics and public service. To cultivate his desire to provide selfless representation to the greatest amount of people, Travis has served in a variety of elected positions, including Freshman President, Sophomore President, Junior President and Senior Vice President. As the Sophomore President, in response to recent tragic events, Travis wanted to highlight the ways in which students could become politically engaged. As a result, he successfully planned and held a school safety forum which featured several statewide elected officials who answered students’ questions. Travis served as the 2018-2019 Senior Adviser on the South Carolina High School Democrats’ Executive Board, where he connected several students with local campaign internships and registered students to vote. During Travis’ junior year, he was selected to attend the prestigious United States Senate Youth Program. As part of this program, Travis met with various federal officials, including the Chief Justice of the Supreme Court, President of the United States, and numerous Senators. Finally, this summer Travis attended Palmetto Boys State and Boys Nation, where he met with the Vice President of the United States and served in multiple elected roles.

Upon entering high school, Travis joined the world’s largest career student business organization: Future Business Leaders of America. Travis climbed the ladder of the organization, serving two terms as a State President and the National President’s Chief of Staff. In July 2019, Travis was elected to represent the 250,000+ members of FBLA as the first African-American National President. As part of this role, Travis sits on the National Board of Directors, analyzes membership data, and spearheads the development of new projects and initiatives. One such initiative, the National Uniform Challenge, was designed to provide professional attire to members in need across the nation.

Travis maintains an integral presence in his community by serving as a mentor to younger individuals, and is extremely active in his church. This fall, Travis will attend Harvard College and pursue a concentration in Government. After college, Travis intends to attend law school to provide representation to underprivileged citizens. As a Ron Brown Scholar, Travis is excited to put service above self and open doors for others.