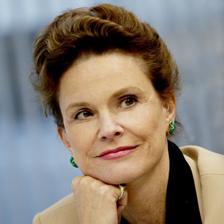 Ambassador Dougan has served in senior communications technology, foreign policy, and management positions for more than three decades, including appointments by three U.S. Presidents (Republican and Democrat) in US Senate confirmed positions.  She is currently Chair of Cyber Century Forum (501c3), Senior Advisor at the Center for Strategic and International Studies in Washington DC, and Co-chair of the Center for Information Infrastructure and Economic Development (CIIED) under the auspices of the prestigious Chinese Academy of Social Sciences (CASS) in Beijing.

Early in her career, Ambassador Dougan worked in commercial, cable and public broadcasting. At age twenty-three she became Time Inc.’s youngest executive and first CATV Marketing Director (now TimeWarner-AOL).  Under appointments by President Ford and again by President Carter as a Director of the Corporation for Public Broadcasting, she worked on the development of the first U.S. TV broadcast satellite network and innovative public radio and TV program initiatives.  Ambassador Dougan is an award winning television producer including The Nutcracker and the PBS/NPR special: The MX Debate with Bill Moyers (winning the 1981 Peabody Award “for excellence in broadcast journalism”).  Other media activities have included Chairman, Editorial Advisory Board Christian Science Monitor TV, a co-founder of the International Media Fund, and the organizing committee of the Sundance Institute.

Ambassador Dougan has authored or edited over thirty publications dealing with global market, policy and political dynamics of information technologies and services. Her public service and professional leadership accomplishments have been honored by many awards including: the Distinguished Service to Journalism Award (University of Utah), National Security Agency Medal, the Outstanding Women in Communications Award, AAUW’s Utah Women of the Year, Outstanding Young Women in America and Distinguished Citizen of Maryland (Governor’s Award).  In 1965 she was given the Key to the City of Seoul and made an honorary citizen of Korea.  A graduate of the U of Maryland in industrial psychology, she pursued additional studies at the U of Utah and the Harvard Advanced Management Program. Her husband, J. Lynn Dougan, is an economist.  They have two children, Gavin and Elena.