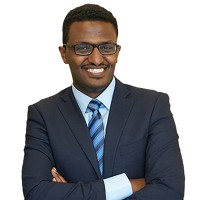 Samuel Z. Alemayehu is the Managing Director of Cambridge Group Companies and CEO of Cambridge Industries Energy. He currently leads CGC’s investment efforts in Africa and handles the operation of Cambridge’s renewable energy mission in the continent. Sam is based in the UK and East Africa as he leads CGC’s efforts to introduce innovative technology to address major challenges in emerging markets.

Prior to joining Cambridge, Sam was the founder of 4AFRI Media; a venture backed mobile software start up focused on the African Continent. 4AFRI was funded as the Africa version of 4INFO (www.4info.com) the leading SMS services provider in the US. 4AFRI had offices in both Ethiopia and Cameroon developing mobile-based solutions in entertainment, lottery, health, jobs and many other sectors. 4AFRI had reached over 5million customers in less than a year and produced over 100 applications. Sam also lead the creation of 4AFRI’s subsidiary, Lotophone S.A. in West and Central Africa based on exclusive license to run lottery services on the mobile phone.

Samuel started his professional career in Silicon Valley as a serial entrepreneur as founder of three successful tech ventures before his 23rd birthday. Sam started creating companies while presuming his education at Stanford University to address various challenges. He was an Associate at Venrock Associates (Rockefeller Family Venture Firm) investing in consumer media and mobile applications. 4AFRI was initially incubated at Venrock but was funded independently by a consortium of investors including SpringHill Equity and leading angel investor Josh Mailman. Sam has worked in various countries in Africa including Cameroon, Gabon, Senegal, Mali, Algeria, DRC, Ethiopia, Djibouti, Kenya, Uganda, Tanzania, South Sudan and South Africa.

After 4AFRI Sam joined Cambridge Group Companies and help lead the creation of Cambridge Industries Ltd, now a subsidiary of DP Cleantech Ltd. (www.dpcleantech.com) to develop and construct waste-to-energy and biomass plants in Africa. Currently he is overseeing the construction of a 50MWe waste-to-energy facility in Addis Ababa, Ethiopia and the development of facilities in Uganda, Kenya, Cameroon, Senegal and Djibouti. The innovations at CIL – DPCT has made it possible to expand modern Waste-to-Energy technology to emerging markets disposing municipal and agricultural waste in an environmentally friendly way. CIL plans to build over 1,000MW of waste and biomass fired facilities in Africa before 2020.

Sam is an expert on technology investments and development of renewable energy projects in emerging markets with emphasise in waste-to-energy and Biomass. Following the successful merger of Cambridge Industries Ltd with DP Cleantech; Sam is currently leading Cambridge’s development of large-scale wind farms in Africa as part of President Obama’s Power Africa initiative. Cambridge Industries Energy in partnership with General Electric Inc. and LAFTO Turbine Technologies is in the final stages of preparation to commence the construction of 310MW Wind Farm in Aysha, Ethiopia. The wind farm facility when completed will constitute over 10% of Power Africa’s stated goal for Africa and introduce a world-class wind facility in East Africa.

Sam is currently on the board of various companies and is co-chair of the Cambridge Investment committee with the former Director of Investment Banking for Africa at Credit Suisse. In this capacity Sam overseas the deal pipeline and manage the entire investment cycle of companies in the pipeline. The team has helped channel hundreds of millions of dollars in the past three year for innovative projects in Africa.

Mr. Alemayehu was a Ron Brown Scholar in 2004 and alumni of Stanford’s School of Engineering.