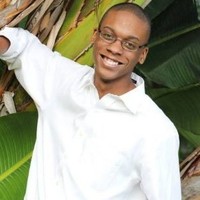 Tyler Stephen Parker was born in Gainesville, FL on August 26, 1995 to loving parents Burton K. Parker and Joycette E. Parker. He has 2 older brothers, Kenneth and Brandon Parker, as well as one twin sister, Taylor Parker.

With 3 siblings and a good-sized backyard, Tyler had plenty of entertainment in his childhood. His parents ensured that he was involved in at least some degree of athletics, and for a while Tyler played baseball. Tyler has attended many different schools, including High Springs Community School’s Gifted Program, Countryside Christian Academy, Stephen Foster Elementary School’s STEM Academy, Lincoln Middle School’s Lyceum Program, and Gainesville High School’s Cambridge Program, and he has also been a member of the National Achievers Society since 2002.

Biblical values were instilled in Tyler at a very young age. Every Sunday, Tyler attended Miracle Temple Church where his grandfather Dr. Freddie Hickmon pastored. In addition, Tyler’s father, entering his own ministry, ensured that the family held bible studies nearly every Saturday to discuss the word of God and its place in each of their lives. The immersion in biblical teachings proved to shape Tyler’s integrity into the steady moral foundation that it is today. Tyler has pledged to abstain from alcohol and other drugs and to live a life pleasing to God.

Tyler joined Lincoln Middle School’s band program as a percussionist in 6th grade, an activity he carried into high school in Gainesville High School’s Marching Band. In the Gainesville High School Marching Band, Tyler works his way up the ranks from freshman bass drum player to percussion section leader in 2011, the year in which Tyler helped lead his band program to a state championship in FMBC Class 3A Marching Band. Seeking to share his love of music in a more effective capacity, Tyler auditioned for Drum Major in the spring of his junior year and was appointed one of three Drum Majors of the 2012 GHS Marching Band.

Tyler is also very involved in politics. He interned on the political campaign of Philip Dodds in Florida 3rd Congressional District and also started a politics club at his school. He organized a successful Young Democrats /Young Republicans Debate at Gainesville High School and has been awarded Outstanding Statesman Runner-up twice in the Youth in Government State Legislature, a statewide mock government program. He was also appointed to Boys State in 2012.

However, for all of the happiness and success in Tyler’s life, he has had to overcome tragedy to become the boy he is today. In 2007, Tyler’s mother Joy was diagnosed with pancreatic cancer, to which she eventually succumbed in the summer of 2010. Watching his mother waste away was indeed traumatic, but still he charged on, eventually earning the position of first in his class while taking a challenging course load of AP and AICE courses. He is a National Merit Finalist and a National Achievement Scholar, proof that a dedication to achieving excellence pays off.